Urwerk, the iconic independent watchmaker from Geneva has introduced the UR-210 Dubai which is a one-of-its-kind piece that uses the satellite system for displaying time – Urwerk’s trademark function. The UR-210 is hand-engraved by the expert himself – Florian Güllert and is a rare collectible in itself.

The UR-210 is a timeless tribute to Dubai, a worldly city bustling with culture, tradition, history and wealth. All of it embodied in the dial of this intricate watch. The artwork will be unveiled at the Dubai Watch Week hosted by Ahmed Seddiqi & Sons.

The UR-210’s theme is described as “the spellbinding superlatives of Dubai, the maddening, yet tantalizing megacity” by watchmakers themselves. Felix Baumgartner, co-founder of Uwerk, says the theme was inspired by his first visit to Dubai in 2007 and how fascinated he was by the paradox the city encapsulates. A city of extreme lavishness set with extreme aridity to its east and the Persian Gulf to its west – with such contrasting forces there is bound to be great artistic inspirations and stories all around. 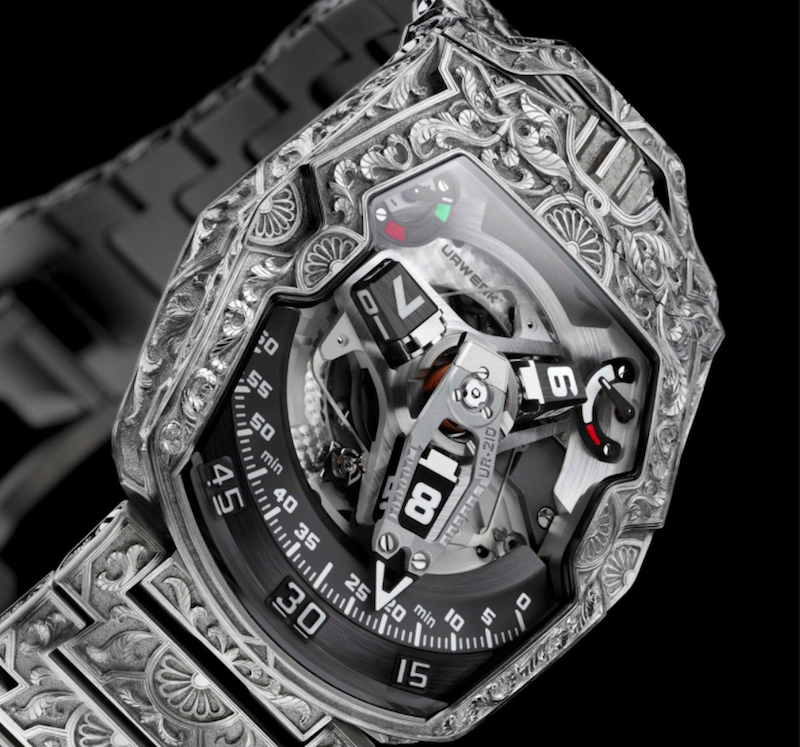 The engraving on the UR-210 watch tries to capture the character of the city through its detailed patterns like the mosaics that are found on ancient middle-eastern places of worship and royal palaces. The watch is engraved from the case to the tip of the bracelet involving 300 hours of labor to complete the master timepiece.

The watch runs on caliber UR-7.10 that has the patented revolving satellite complication with wandering hours and three-dimensional retrograde minute’s hand. It has a power reserve of 39 hours. The UR-210 measures 43.8 mm in width, 53.6mm in length,17.8 mm in thickness and is water resistant up to 30 meters. The dial is mounted on a metal bracelet with deployment clasp developed by Maspoli for Urwerk.

The strong and often contradictory sensations, stirred by Dubai’s extravagant skyscrapers, highways, luxury cars, and the surrounding desert are all so well captured in the UR-210 making it a glorious homage to the city.