This time Jacob & Co. has added Astronomia Flawless case, with a hand-carved and hand-painted replica of the Imperial Dragon, to its collection. Jacob Arabo, the founder of Jacob & Co., says, “I have always loved the Ilona Andrews quote, ‘If the sky could dream, it would dream of dragons.’ I have been dreaming of creating the ultimate dragon to showcase with the Astronomia Flawless case, and we have now done it.”

This magnificent miniature masterpiece, “Astronomia Flawless Imperial Dragon” is a fine example for devoted craftsmanship as it is solely hand-engraved and hand-painted. This unique piece is designed taken into account all the tiniest possible details of features of a dragon – the Chinese mythical creature which supposedly brings you good luck. The replica of the dragon is rotating its way around the spectacular Astronomia double-axis tourbillon movement. 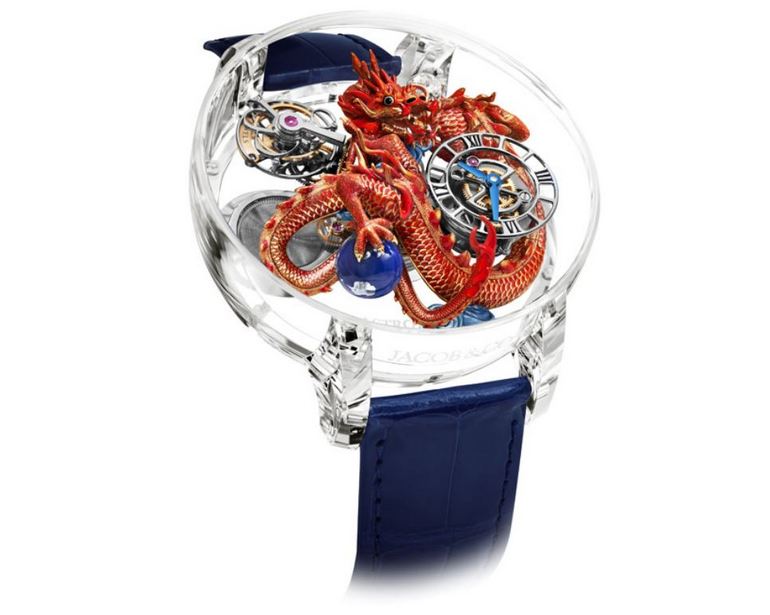 The case is made exclusively of crystal-clear sapphire so that the Imperial Dragon sculpture and the entire movement could be seen from any angle. 100% transparent, 360-degree sapphire crystal case of the Astronomia Flawless reflects how the expert knowledge of engineering is applied to create it. Within this small space inside the sapphire crystal case, nobody would ever imagine such a lot of features, such as – ‘the dragon’, ‘the turning and spinning tourbillon’, ‘the revolving hand-painted magnesium globe’ and ‘the rotating 288-facet Jacob-cut diamond’ – could be compacted. The beauty of the dragon, along with all its incredible details is reflected in the facets of the diamond as it turns.

This flawless case which is a true masterpiece full of creativity required almost 1,000 additional hours in the production process prior to the introduction to the market. To create this breathtaking sculpture of the solid 18K rose gold Imperial Dragon, the sculptor spent approximately three full months of non-stop work in creating, casting, polishing and giving the finishing touches. This replica of dragon comprises of four distinct pieces — the head, the body, the tail, and the water below. These four pieces have been assembled together exquisitely to create a single piece of art without a single blemish on the surface of it. This was achieved by focusing on full attention when assembling the dragon. If a minor deviation of attention occurred during the assembling, it could have ruined the surface of the dragon. Because of the dedication and the talent of the sculptor the end product has been completed with perfection. The assembling process was a tedious one as the gold dragon made with 18K rose gold is comparatively heavy whilst the screws fixing it together, on the other hand, are tiny. After the completion of the assemble the dragon was moved on to the painter, who completed all the finer details such as the scales on the dragon, the teeth, the tongue, and the eyes. The engraving and painting of the dragon figure have been done proficiently by leaving enough gold for it to shine so that the imperial dragon looks alive. 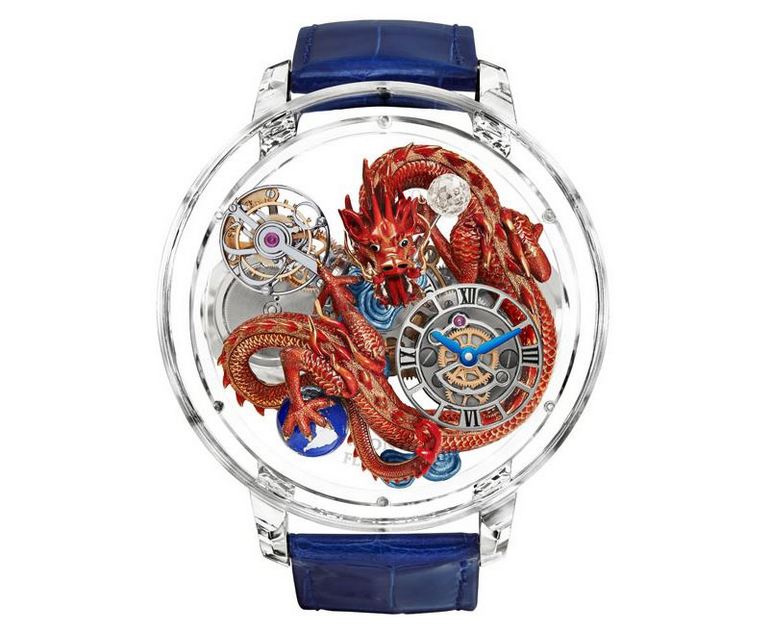 In China, the mythical figure “Dragon” was reserved for the Emperors and represents prowess, nobility, and fortune along with the ability to drive out evil and bring out luck. Thus, these rulers were known as “Sons of the Dragon.” For many emperors, the dragons they used were often holding a pearl. The dragon represented authority while the pearl represented wisdom. The same concept applied when designing the Astronomia Flawless Imperial dragon as it is holding the magnesium blue-lacquered globe in one toned claw and grasping a pearl (18K rose gold ball painted to look like a pearl) in the other.

The Imperial dragon is painted in red because it is the most fortunate color in Chinese culture, representing celebration, fertility, vitality, royalty, imperial power and also is believed to ward off evil. For instance, during olden days the Emperors wore red very often, the doors to their chambers were painted in red and they always wrote their decrees in red ink.

If you are fortunate enough then you can proudly be the owner and wearer of this unique timepiece with the fine art sculpture of the Imperial dragon by spending $1.5 million. The “Astronomia Flawless Imperial Dragon” is an astonishing piece of art combined with engineering expertise is a representation of the motto of Jacob & Co., “Inspired by the Impossible.”