Over the years RJ-Romain Jerome has made a name for itself in the world of high-end and unique watches by creating exclusive pieces. One of their expertise is designing steampunk-inspired limited editions. They have just introduced a new exclusive timepiece, a Batman limited edition. The latest collaboration between movie studio Warner Bros. and RJ-Romain Jerome resulted in creating the Spacecraft: Batman. This is the second Batman watch designed by the Swiss watchmaker, the first “Batman-DNA” was released in 2013 to celebrate the Dark-Knights 75th anniversary. If you have missed out on buying one from the first Batman edition, this is your chance to snag one because the design of this edition is based on the Spacecraft edition.

Everything that is Batman is captured on the design of this wonderful timepiece. Something for superhero watch enthusiasts to look forward to, the Spacecraft: Batman is made of materials such as titanium and anti-reflective metalized sapphire crystals. It also features a finish influenced by Batmobile and facetted cap engraved with Bat-insignia from Christopher Nolan’s the Dark-Knight trilogy. Other highlights include the numbers in bright blue displayed on a side indicator and a minute display on a black rotating disc with a striking blue cursor on the top of the case. 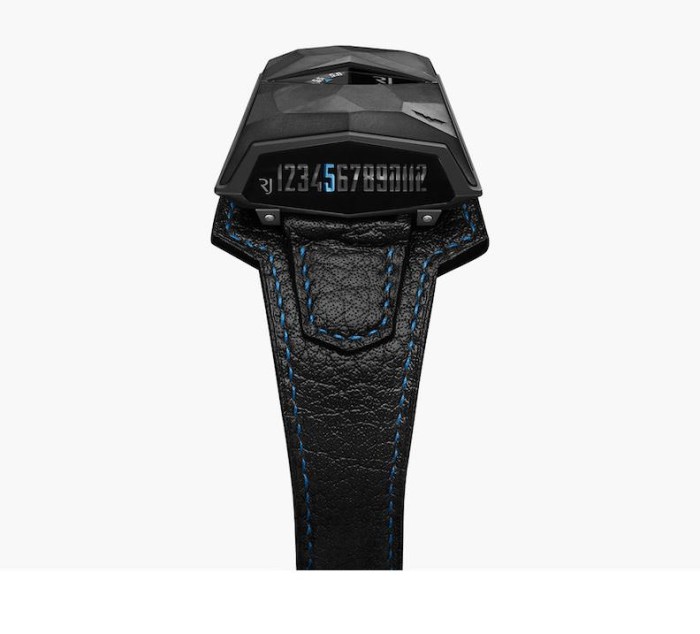 The Spacecraft: Batman timepiece is powered by a self-winding mechanical movement. It also features a screw lock crown located on the edge of the case. It comes fitted with a high-end buffalo leather strap in black with blue stitching and a titanium pin buckle matching its black case. The overall look of the limited edition watch is one of an alien aircraft – as it intended to be.

Limited to just 75 pieces, the Spacecraft: Batman comes with a $33,000 price tag. To my eye at least, it also resembles a bit of Darth Vader, not just Batman. For additional information check at Romain Jerome online store or visit Harrods in London.