Perfect for a Sparkling Underwater Swim

A lot of people have used the adjectives gaudy and tacky to describe Rolex’s newest addition to its collection -the Rainbow Daytona in Everose. It may be loud for some personal tastes, but this loudness seems to emulate an aestheticism that boasts of great manufacturing skill.

Rolex’s Rainbow Daytona collection was released in 2012 as a limited edition collection both in white and yellow gold. The line soon gathered an ardent following, tripling its value since its release date. This year Rolex adds a new watch to this line with the Everose version which is manufactured in metal. While the Everose is very similar to its two predecessors, its unique features are the new indexes at the hours and its case and bracelet which come in metal. 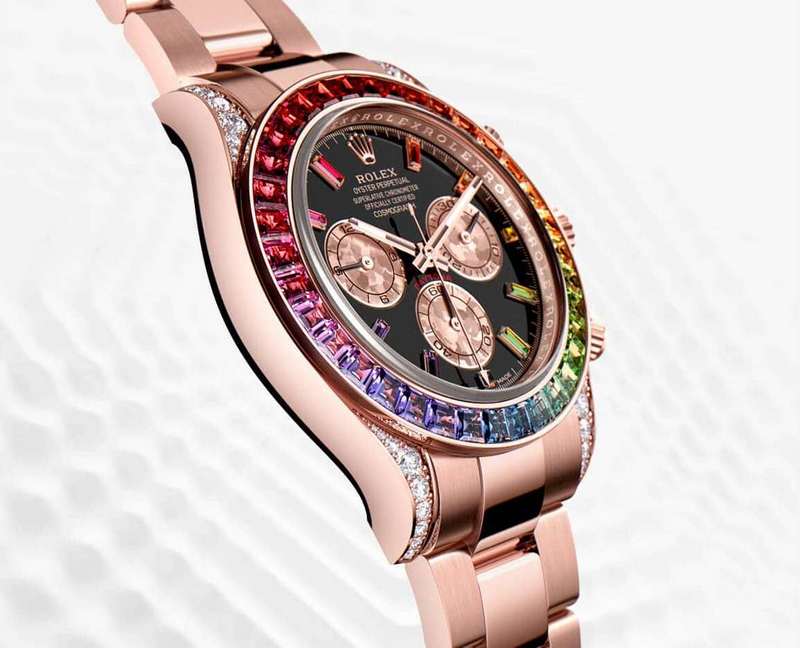 Officially launched as the Rolex Cosmograph Daytona reference 116595RBOW comprising of a precious metal chronograph with a sapphire and diamond-set case, the Rainbow Daytona is made of Everose; Rolex’s own alloy of pink gold which gives it a luscious pinkness. This pinkness pairs up with a black lacquer dial, Pink Gold Crystal sub-dials, 36 baguette-set sapphires in the bezel, 56 diamonds set into the lugs and case, and colored sapphire indexes. It is powered by the automatic caliber 4130 and is waterproof up to 330 ft. (100 m) which naturally makes you think what better watch than this for a swim…

Thus as a traditional chronograph, adorned with exquisitely identical, hand-cut and hand-set sapphires -the Rainbow Daytona in its looks and finish holds up to the high design standards that are classically associated with signature Rolex Daytona design and manufacturing elements. This watch upholds the Rolex benchmark for high quality through efforts such as; only using Internally Flawless sapphire and employing a team of around 20 in-house gem-setters to execute the setting of the sapphires into precision.

If you ever get the chance to own a Rainbow Daytona you can without a doubt consider yourself extremely privileged and a front-runner of the modern-day glitterati since it does come with a stunning price-tag of $96,900 (excluding the diamond dial and bracelet). FYI Rolex online has more specifications and information on the Rainbow Daytona to satisfy your glitterati taste-buds; if you so wish.