The Pershing Samba Madeira has joined The Tonda Woodrock and Tonda Woodstock in paying tribute to the music world. The latest addition from Parmigiani Fleurier to the Pershing collection celebrates Brazil and its Samba rhythm.

The colorful dial of this unique watch is handcrafted using marquetry. Marquetry is the ancient decorative technique, where elaborate patterns are formed by inserting thin pieces of material such as wood, feathers, and ivory into a wood or in this case metal veneer. The dial of the Pershing Samba Madeira is a close up of a guitar, six guitar strings are created with wood pieces as thin as a single strand of hair. Soundhole of the guitar matches the dimensions of the tourbillon cage. When tourbillon oscillates, it brings the guitar to life as if it’s playing music. 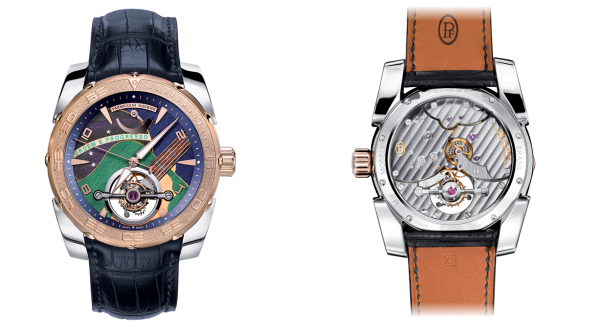 The Pershing Samba Madeira is made up with more than 237 handcrafted components. Samba Madeira carries a 192-hour power reserve and equipped with a PF510 caliber movement. Bridges are adorned with Côtes de Genève decorations. Watch is housed in an 18 karat pink gold bezel. Hermes made leather strap is of the same dark blue color of the Brazilian flag. Unique watch comes in a hand-painted case of the colors of the Brazilian flag.

Parmigiani Fleurier is reaffirming its strong Brazilian ties they started with the Brazilian Football Confederation, this time through music and culture.