This year Jacob & Co. has unveiled a significant number of gizmo pieces before, during and after Baselworld 2017. Latest, Jacob & Co Opera Musical Watch is another one of the beautiful pieces they took to the recently concluded trade fair. With this timepiece, they are showcasing two of Switzerland’s well-known crafts – the mechanical musical box and the high-end watch movement. 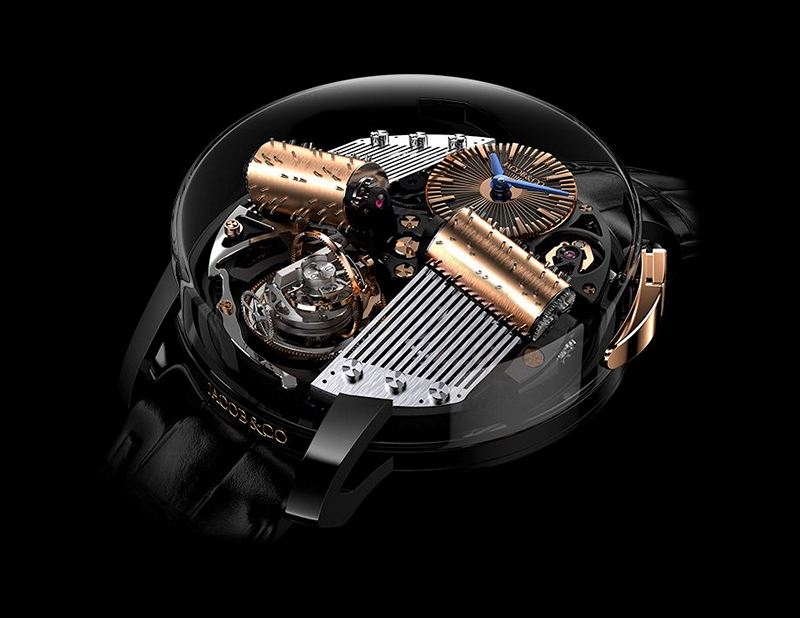 Similar to Astronomia watches, this watch also consists of four axes extending from the center of the movement – two are fitted with cylinders, third with Jacob & Co.’s signature triple-axis tourbillon movement and the fourth with the hour and minute dial. The music portion of the timepiece is housed in the two cylinders powered by a central flywheel. They play a 30-second melody with 120 notes – music is generated by the tiny studs on the cylinder making contact with individual blades of the comb. Different notes are composed of different lengths of combs. Once the cylinders start to play music several mechanics jump into action, significant among them is the 120-degree simultaneous rotation of the tourbillon and the hour and minute dial – around the dial.

The Opera Musical Watch is powered by manual-wound JCFM02 movement developed specially for it. Titanium made components of the movement in addition to transmitting crystal clear sounds also helps minimize the weight. The 646 components movement is housed inside a 43mm thick case. Functions include 3 Hz frequency and 72 hours of power reserve. Music is activated by the pusher located on the right side of the case. 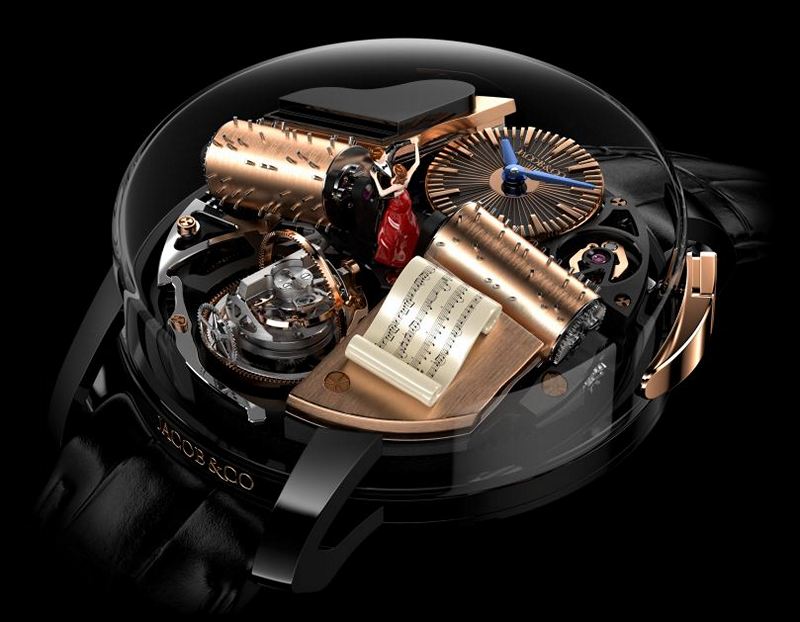 This excellent timepiece comes in two different versions. One is a much simpler version in black and gold high-end finishes with just the music cylinders, movement and, hour and minute dial. The second version is full of music-themed bells and whistles – sheet music on one comb, a piano on the other and the tips of emerging combs shaped like piano keys. In the middle of it all, there is a couple dancing to the music. The dial itself is made from 18-karat rose gold with hour and minute markers resembling a stringed instrument and feature blued hands

Each version of Jacob & Co Opera Musical Watch is limited to just 18 pieces. For pricing contact them here.