Jacob & Co. is ultra luxe jeweller and watchmaker based in New York famous for their extraordinary timepieces like the Astronomia Tourbillon range that is art itself, and one needs to understand art – not everyone will love it, not everyone can afford it and that is what makes for some of the most priceless pieces. This year, Jacob & Co. released an exceptional new version of its super intricate piece, the Astronomia Tourbillon Clarity Octopus worthCHF 880,000 which is approximately $930,000.

The Astronomia Tourbillon Clarity Octopus is far from the usual standards of elegance, proportions and mechanisms. It embodies the boldness and technical fascination of the Astronomia range – an extravagant, uber-complicated timepiece staging a poetic rendering of the celestial world that was first released in 2014. Every element is in constant motion, all under the control of a triple-axis tourbillon regulator.

The Clarity Octopus is built around a 3D octopus stretching its tentacles over the movement, which in turn rotates on a central axis, every 10 minutes. The four planetary indications on four arms balance the movement – the hours and minutes indication; the triple-axis tourbillon regulating the movement; a globe rotating every 60 seconds on two axes; and a round diamond, also rotating every 60 seconds on two axes. Clarity Octopus’ case is 50mm diameter x 25.45mm thickness with 18k pink gold frame and several sapphire crystal windows so you can watch the show from every angle. 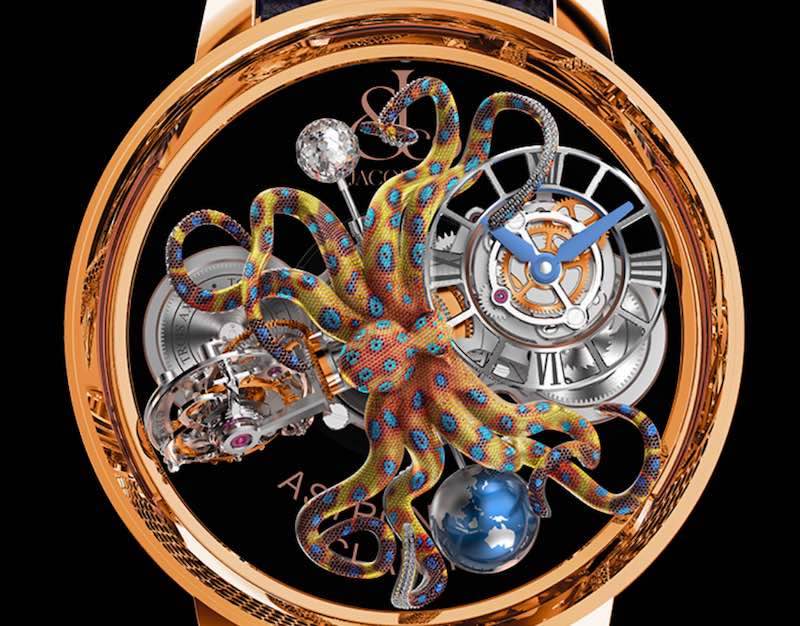 All the parts are hand-polished and hand-chamfered, and the barrel bridge is made from sapphire. The showstopper 2.90g octopus is crafted out of titanium and is engraved, painted and lacquered by hand. The spherical 1-carat diamond is an exclusive Jacob & Co. cut emanating light from its 288 facets and the globe is magnesium lacquered to add the finishing shine. The movement of the Clarity Octopus shows meticulous craftsmanship and is a grand dance with the stars in the sea (it is water resistant up to 30m!).

The spectacularly intricate workings of Astronomia Tourbillon Clarity Octopus watch is carefully protected in a highly domed sapphire crystal with anti-reflective coating. The movement is wound and set via two fold-out crowns at the rear of the watch. The Clarity Octopus comes with an alligator strap secured on a folding buckle with a quick release spring bar system. The Astronomia Tourbillon Clarity Octopus by Jacob & Co, has truly raised the bar high enough to reach the planets and stars, it is one of the finest pieces in horology.