We have already covered two Astronomia watches from Jacob & Co – first of which almost two-years to this month and the second $1Million Astronomia Flawless which they unveiled last month at the SIHH 2107. Both are beautiful eye-catching pieces with the sky and the universe taking center stage. The latest, Jacob & Co Astronomia Solar Watch unveiled in time for Baselworld 2017 is another masterful creation from the watchmaker that pays tribute to our vast universe and its solar system. 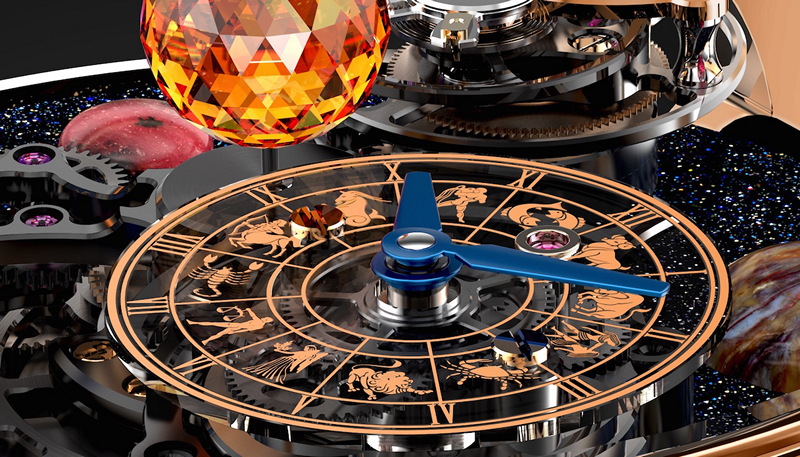 Arranged inside the 44.5mm sapphire case are eight planets that rotate constantly, as they should be. The entire system is powered by the in-house built new JCAM19 movement, which apparently took 2-plus years to research and develop. The uniqueness of the movement lies in its 439 components that rotate non-stop bi-directionally – this helps move the solar system perpetually. The hand-wound movement beats at a frequency of 4Hz. 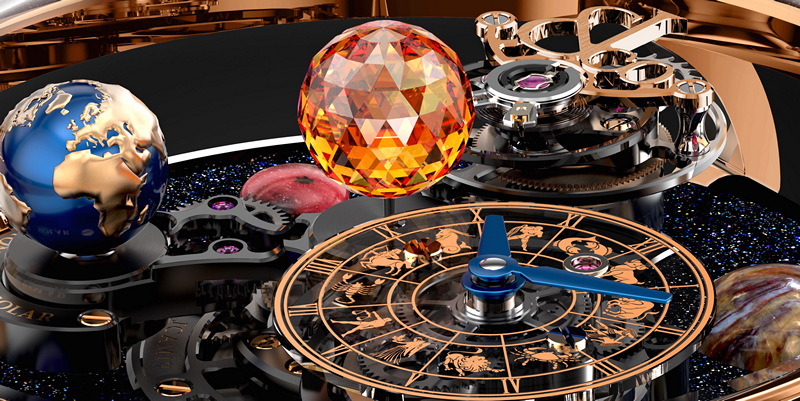 This really is a complicated complication with three arms. The first arm holds the sub-dial made of sapphire that displays time and rotates counter clockwise while ensuring 12 o’clock always stays in the correct position – made possible by a patented differential system. A second arm located at 11 o’clock holds two axes gravitational flying tourbillon with 60-seconds and 10-minute rotation times for the two axes. The third arm features a hand-engraved Earth, just like the real Earth this one rotates around its own axis – every 60 seconds as well as around the dial every 10 minutes.

Now to the fancy trimmings – the sun is represented in the center by a 1.5-carat Jacob-cut Citrine, while the aventurine base houses the constantly rotating planets – Earth, Mercury, Venus, Mars, Jupiter, Saturn, Neptune, and Uranus. The time sub-dial features zodiac time indicators, and blued hour and minute hands. The Astronomia Solar watch comes with a crocodile leather strap and 18-carat rose gold folding clasp. Jacob & Co will reveal price at BaselWorld 2017.