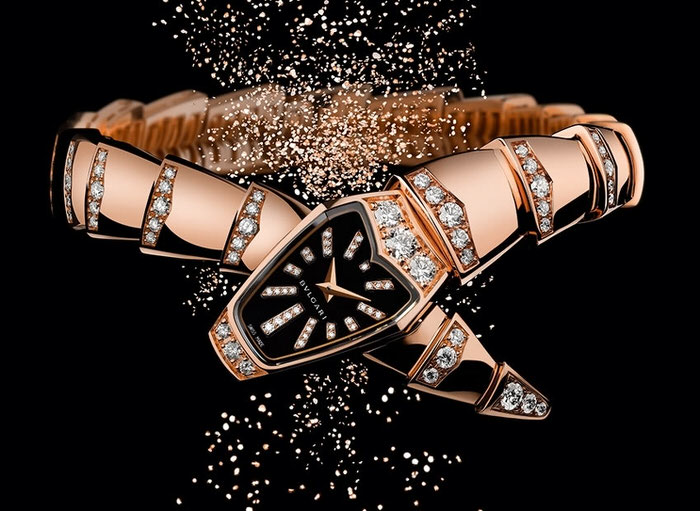 At 2015 Baselworld as in previous years Bulgari has unveiled new versions of their existing watch collections. One of the eye catching timepieces to debut came from brand’s much loved Serpenti line. A well-known hallmark of Bulgari Serpenti watch is its coiled bracelet, its head and tail until now was always designed to go parallel. All that changed with the new flagship timepieces that come with a head-over-tail design, and works as part of its lock mechanism with the help of a double pressure-button. They have also for the first time done away with the internal spring, it now allows for increased wearability and added comfort.

Absolutely gorgeous Serpenti collection has been part of Bulgari since the 1940’s and pays tribute to Roman Empire and ancient mythology. The snake, in Roman as well as in Chinese mythology considered a powerful creature that represents wisdom, strength, and re-birth. And we all know Cleopatra’s attraction to snakes in fashion and in her death. Take all these into account and you know why Bulgari adore their iconic Serpenti collection and not ready to retire it even after 70+ years. 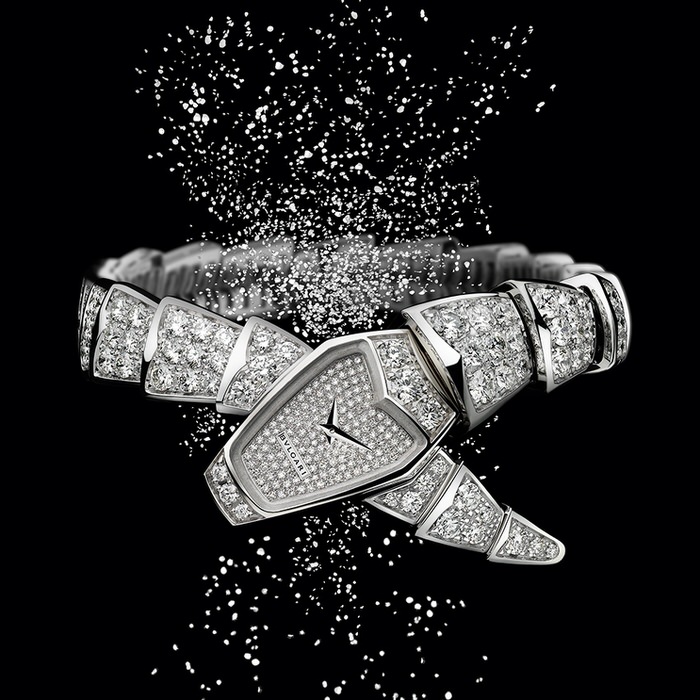 The latest Bulgari Serpenti timepieces comes in two versions – 18 karat pink gold and white gold. Both variations feature adjustable bracelet links that could be removed to fit even the skinniest of wrists and a case that measures 26 mm. The open-worked pattern on the sides and back bring in light to highlight the beauty of the pavé diamonds. Both versions are powered by in-house made Bulgari Calibre B033 Swiss quartz movement.

The white gold version boasts more diamonds than the pink gold timepiece. Its entire dial is snow-set with 144 diamonds weighing 0.29 karats. A total of 168 brilliant-cut diamonds (12.43 karats) decorates the single-row white gold bracelet and six diamonds are encrusted on either side of the case.

Other than looking pretty on your dainty wrist, the only other function of the high jewelry Bulgari Serpenti timepiece is giving you time. Bulgari has not announced pricing during the unveiling.