There are a handful of watches available in the universe made with meteorite fragments, as we’ve seen on the Louis Moinet Stardance watch last year. Swiss watchmaker Badollet has showcased the Tourbillon Stellaire Exceptionnelle at the Baselworld, made from a meteorite, not the whole thing but the baseplate, and the upper bridge of the tourbillon carriage with olivines.

The dazzling diamond encrusted dial of the Tourbillon Stellaire features just blued hour and minute hands and the tourbillon at 6 o’clock. Visible from the front is flying tourbillon’s decorations that include Badollot logo and olivines. 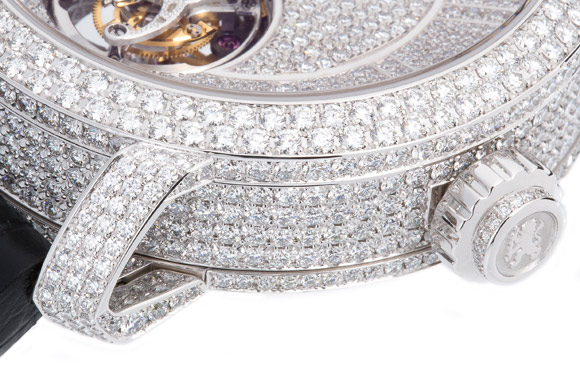 Protecting the BAD1630 hand-wound mechanical movement is the 44 mm palladium-coated 18 karat white gold case covered in 861 diamonds. It is water resistant up to 30 meters and carries a power reserve of 120 hours. The richly decorated open-worked movement features the meteorite baseplate, olivine tourbillon carriage, and hand-drawn bridges. The movement and its workings are visible through the sapphire crystal case back.

The of meteorite fragments used in Stellaire comes from the Cape York meteorite that landed in Melville bay to the west of Greenland some 10,000 years ago. It was an important part of daily life for native Inuits, they used it to make arrowheads, harpoons, and knives.