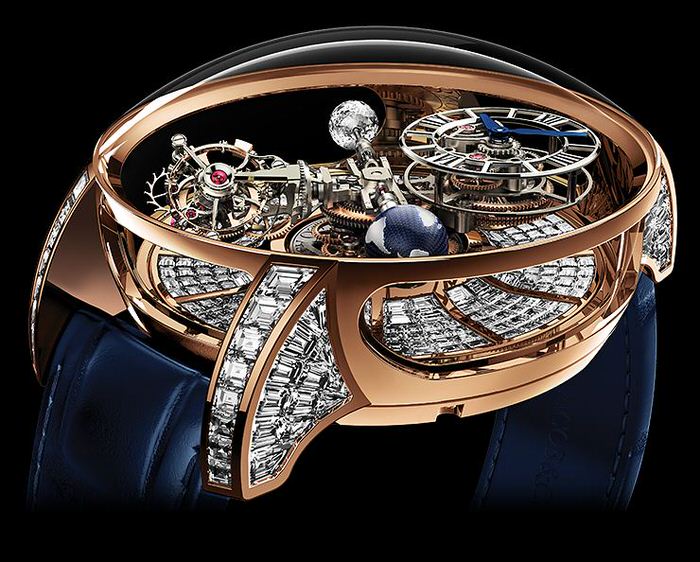 Jacob & Co. taking some extraordinary timepieces to this year’s Baselworld. One I already told you about couple of days ago is the Caviar Emerald Tourbillon covered in 424 stones, which by the way costs $2.45 million. The second is the Jacob & Co. Astronomia Tourbillon Baguette, the next version of the Astronomia Tourbillon concept they unveiled last year. With this watch, Jacob & Co. once again tries to connect with the celestial world through their craftsmanship and horological decorative art, where everything is constantly in motion.

The Astronomia Tourbillon Baguette is housed in an 18 karat rose gold case that measures 50 mm wide and 25 mm thick. The sapphire crystal of this watch come as five separate pieces instead of one large piece. Four smaller pieces are fitted on the side openings while the dome-shaped large piece covers the top. As the name suggests it comes adorned with baguette cut diamonds, 342 of them totaling 16 karats invisibly set. The dial also feature various hand-engraved decorations. 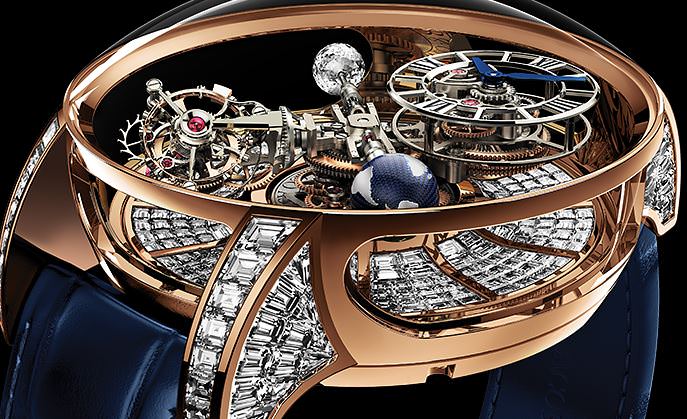 Powered by the in-house made Jacob & Co. JCEM01 manual wound caliber, the movement placed on three arms rotate around the dial and operates the fourth arm with the time sub-dial. It takes each arm 20 minutes to circle the entire dial. You are going to notice that there is no traditional crown, instead two “bow-style” fold out crowns on the back are used to set and wound. In every sense of the word, the Jacob & Co. Astronomia Tourbillon Baguette is a technical masterpiece in the world of high-end watchmaking.