We all like a beautifully decorated Christmas tree, regardless of its size. In Sri Lanka, they had other ideas. They wanted to create the Tallest Artificial Christmas Tree in the world. That record currently held by China, theirs was an 180ft tall (55-meters) ornamented and illuminated giant. Sri Lanka’s record-setting tree stands very tall at 238ft (73-meters) and topped by a 20ft tall (6-meter) shining star.

Building this tree wasn’t all plain sailing. There were construction delays, which in turn resulted in a somewhat a half-baked product on the opening day. Nothing to worry about, these things are normal in Sri Lanka. And some political and religious controversies to spice things up.

Catholic Church wasn’t happy about spending $80,000 on a Christmas tree, which I agree with them. They had to stop work for six days in early December after Cardinal Malcolm Ranjith – representing the island nation’s 1.5 million Catholics – criticized the project. Then came the political rescue via Prime Minister Ranil Wickremesinghe. According to him money for the project came from individuals and private firms. 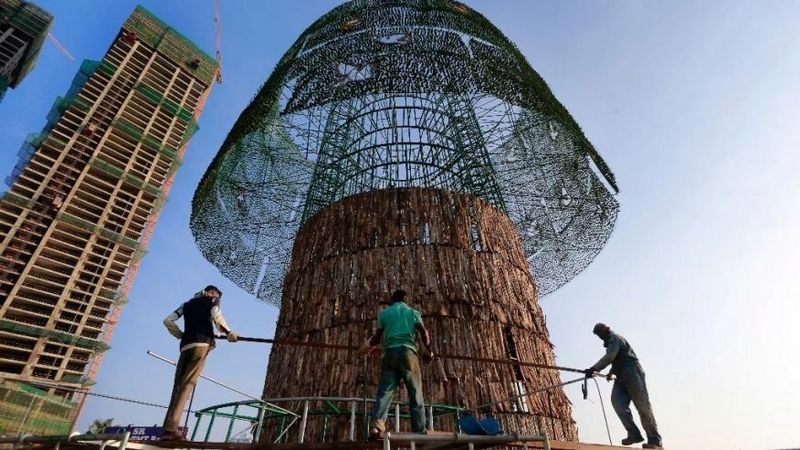 After all the controversies have settled, they ended up with a tree that has a steel and wire frame covered with a plastic net. This net comes decorated with over 1 million natural pine cones in festive colors – red, green, gold and silver. And it is illuminated by 600,000 LED bulbs. The project took port workers and volunteers four months to complete (almost) in time for the holidays. For all their troubles Guinness World Record is yet to confirm this as the Tallest Artificial Christmas Tree in the world.

A Buddhist-majority country, Sri Lanka also has a sizable Catholic/Christian minority from the two major ethnicities. Those who commissioned the project wanted to use the tree as a way to promote ethnic and religious harmony, where wounds are yet to heal after ending the decades-old civil war in 2009. Great way to promote peace and harmony, would’ve been better if it didn’t cost $80,000. If you are heading to Sri Lanka between now and January 6th, make sure to stop by in Colombo to view the Christmas Tree.