The gigantic, white, inflatable 33 ft. tall ‘trump chicken’ made its first appearance in the US in 2017 during the San Francisco Tax March. Then, in February 2018 during the presidents’ day weekend it marched all the way to the White House.

After that, in early July 2018 -this month- a similar Trump-look-alike inflatable, dubbed “Trump baby” resembling an angry Tango-coloured Mr. Trump infant, clutching a smartphone, floated across the British skies in London in protest of the US president’s four-day visit to the UK.

Prisoner 45’s latest public appearance in the US commenced on the 22 of this month around San Francisco Bay by boat. As the pictures show this great white inflated chicken sailing on a barge across the water bears a remarkably ironic resemblance to the great whites that lurk below the waters (I’m sure here many would say ‘pun intended’ given the obvious political implications pregnant in that vivid visual image). 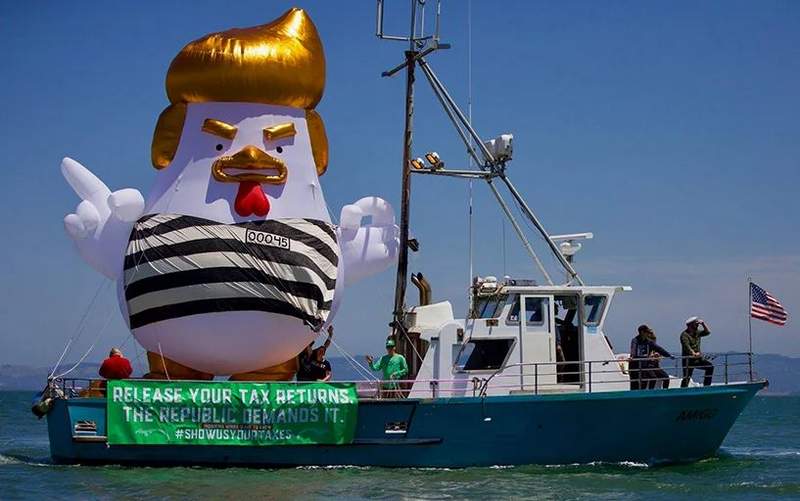 Talking about more practical issues like finances, a GoFundMe page has been set up to raise funds for Trump Chicken’s voyage around San Francisco Bay in order to pay for the cost of rental boats that is required. The page so far has received more than a remarkable amount of $700 in the form of donations.

At present, the boat with Prisoner 45 great white Trump-like Chicken in a black and white prisoner’s uniform is sailing not far from Alcatraz Island. There might be a historical significance for this chosen backdrop since before it closed in 1960’s Alcatraz which served as a maximum security prison was home to the most infamous US convicts. And to add to it, funnily enough, Trump Chicken was last seen abroad on a former Alcatraz Prison Transport boat floating around the once notoriously inescapable prison island complex. Again a little contemplation makes you wonder if (like the ‘pun’ mentioned two paragraphs before) there seems to be quite a bit of irony involved in the backdrop chosen for Trump Chicken’s voyage across boat as well as its connection to the attire Trump Chicken is donning. Coincidence? May be, may be not…