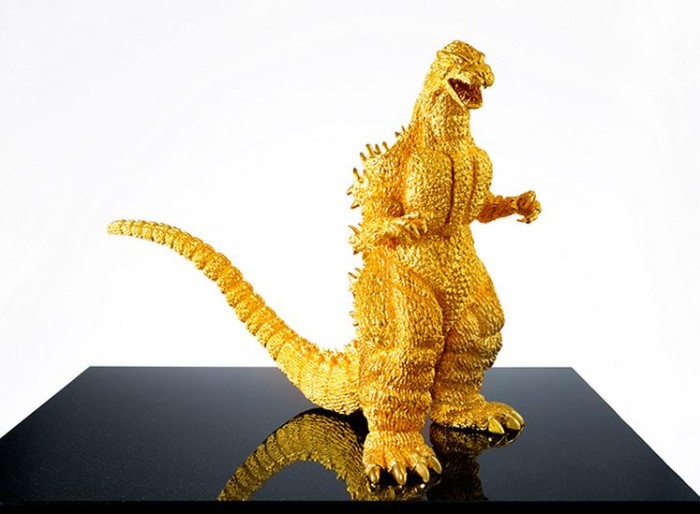 Not so long ago this year high-end Japanese jeweler Ginza Tanaka made a solid gold Darth Vader, not for sale but to put on display at the annual Tokyo Disney Expo. This time around they have made a solid gold Godzilla, who is celebrating 60th birthday this year. For sale Godzilla figurine measures 24-centimeters (9.4-inch) and weighs 15 kilograms (33-lbs). It comes with a gigantic price tag at ¥150 million (approx. $1.5 million). Pure gold Godzilla will be available beginning Sunday July 20.

The pure gold statuette was modeled after the Godzilla of 1989 “Godzilla vs. Biollante” movie. Few differences from the movie version includes extra muscles, polished nails, and fangs and fins. Jeweler also noted they worked with Koichi Kawakita in creating the figurine, Kawakita served as the special effects director for some of the Godzilla movies.

The golden Godzilla before going to reside permanently at some millionaire’s mansion will spend time travelling the country. The statuette will be displayed at the G Haku Godzilla exhibit at the Hikarie building in Tokyo’s Shibuya from July 30 to 29. Then it moves to the Ginza Tanaka flagship store in Ginza until August 10, from August 14 to 24 it will be at the Abe no Harukasu Kintetsu department store in Osaka. It is also scheduled to make stops at other Ginza Tanaka stores across Japan.

Godzilla’s birthday celebrations are not limited to Japan, Hollywood has a new Godzilla movie directed by Gareth Edwards. Movie opens in Japan on July 25, so pure gold Godzilla going on sale on 20th makes a lot of business sense.