For history and war buffs with a love for the game of chess (and deep pockets), there is an exquisite chess set on sale for $1.65 million from auction house M.S. Rau Antiques in New Orleans. The Battle of Issus Chess Set so beautifully crafted it looks like the real deal from 1000s of years ago. But in fact made by a master jeweler in the last decade or so with 14,000 plus man hours spent. 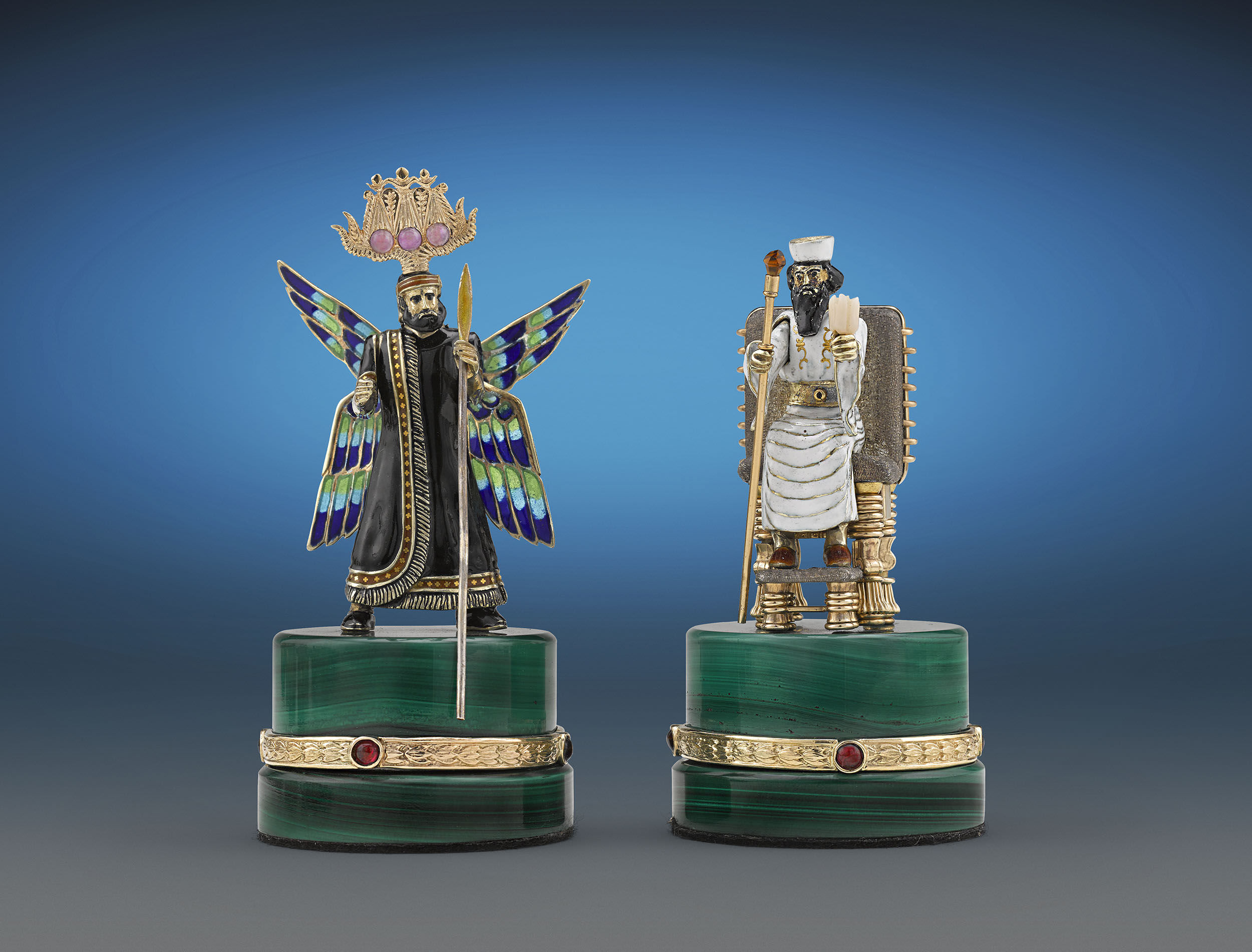 Each piece of the set portrays an actual figure from the battles two armies – the League of the Corinth and the Persian Army. For instance, kings are represented by Alexander the Great for Greeks and Darius III for Persians. The Greek goddess of war and wisdom Athena has taken over the Queen piece, while the winged Persian god of war stepped in as queen of Darius III. 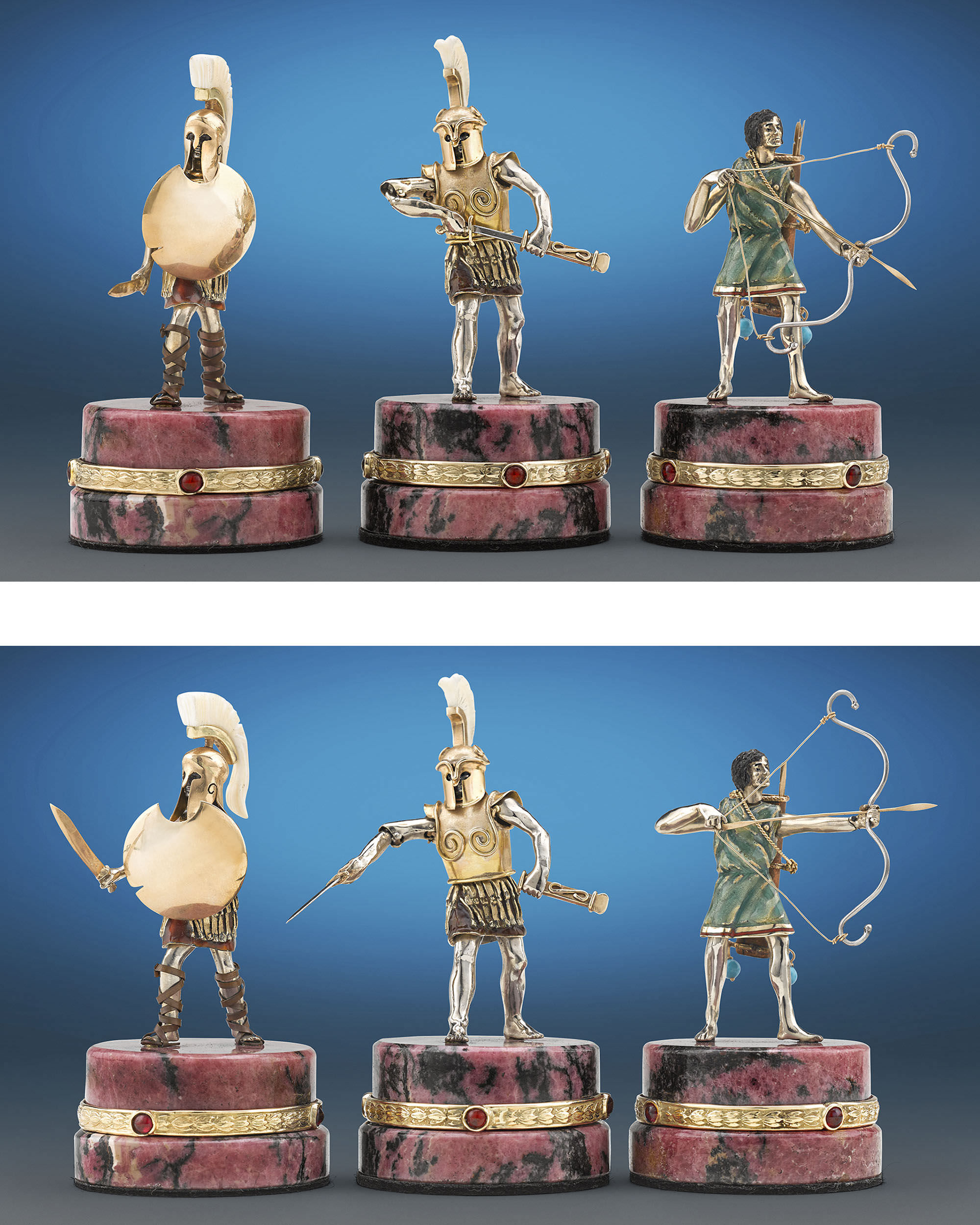 Chess pieces handcrafted from 14 karat gold and decorated with precious stones stands on bases made from solid pink rhodonite (Greeks) and green malachite (Persian Army). Every piece on the set is rich in detail. You can see the laces of the soldier’s boots and tiny feathered arrows in their quivers. That’s not all, each piece comes with mechanical movements too. When the band on the base is twisted, it triggers a movement unique to each individual piece like Alexander lowering his sword and horses shaking their manes. Open image link on a new tab to see amazing details. 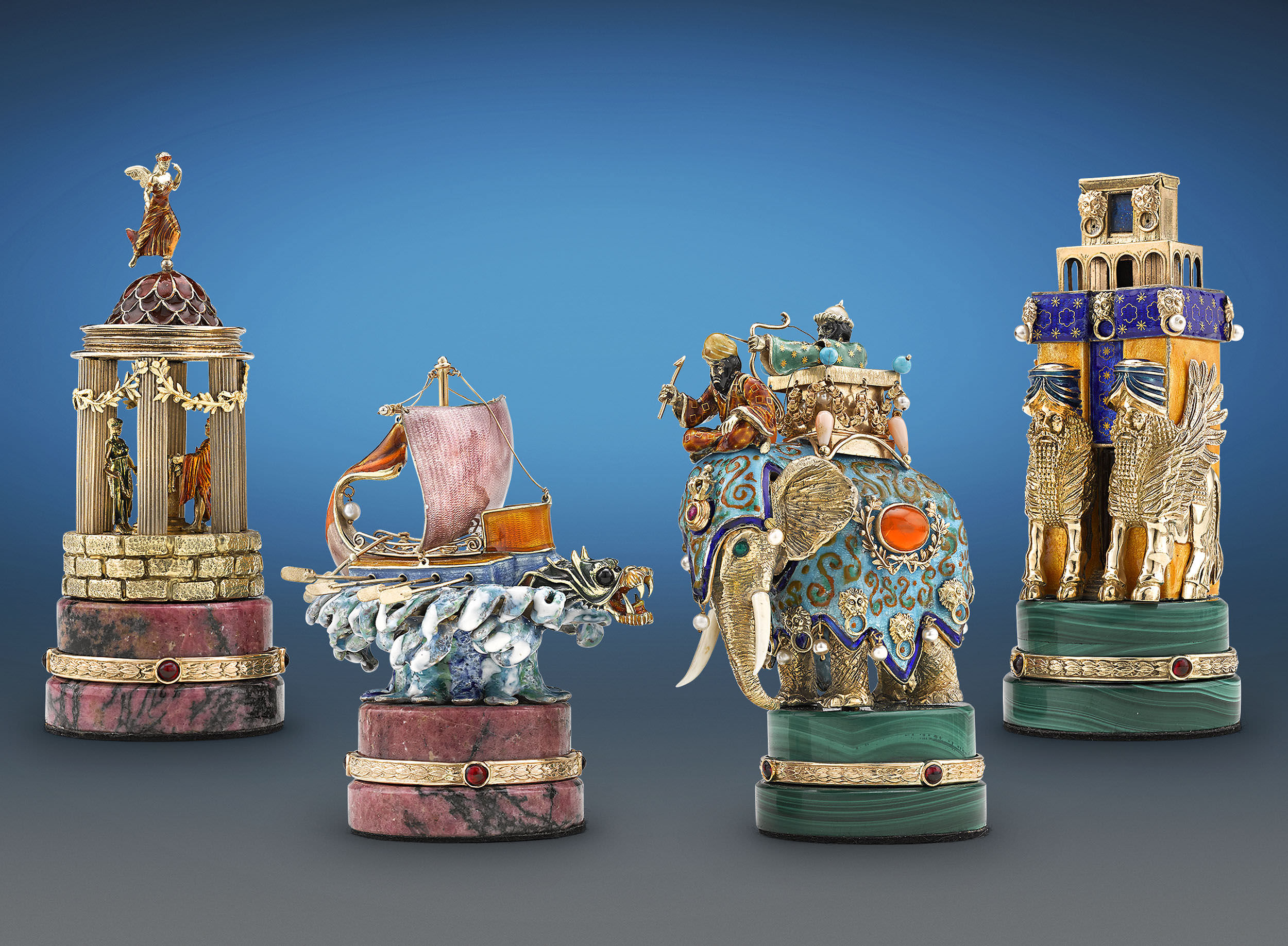 Bishops of Corinth Army are represented by intricately designed warships sailing over water, while bejeweled elephants act as Persian bishops. Beautifully decorated columned temples of ancient Greece and Persepolis acts as rooks for the warring armies. As in real life, battle-hardy foot soldiers wielding javelins, swords and bows and arrows plays the pawns. The noble role of the knights on the chess set is given to the horsemen. 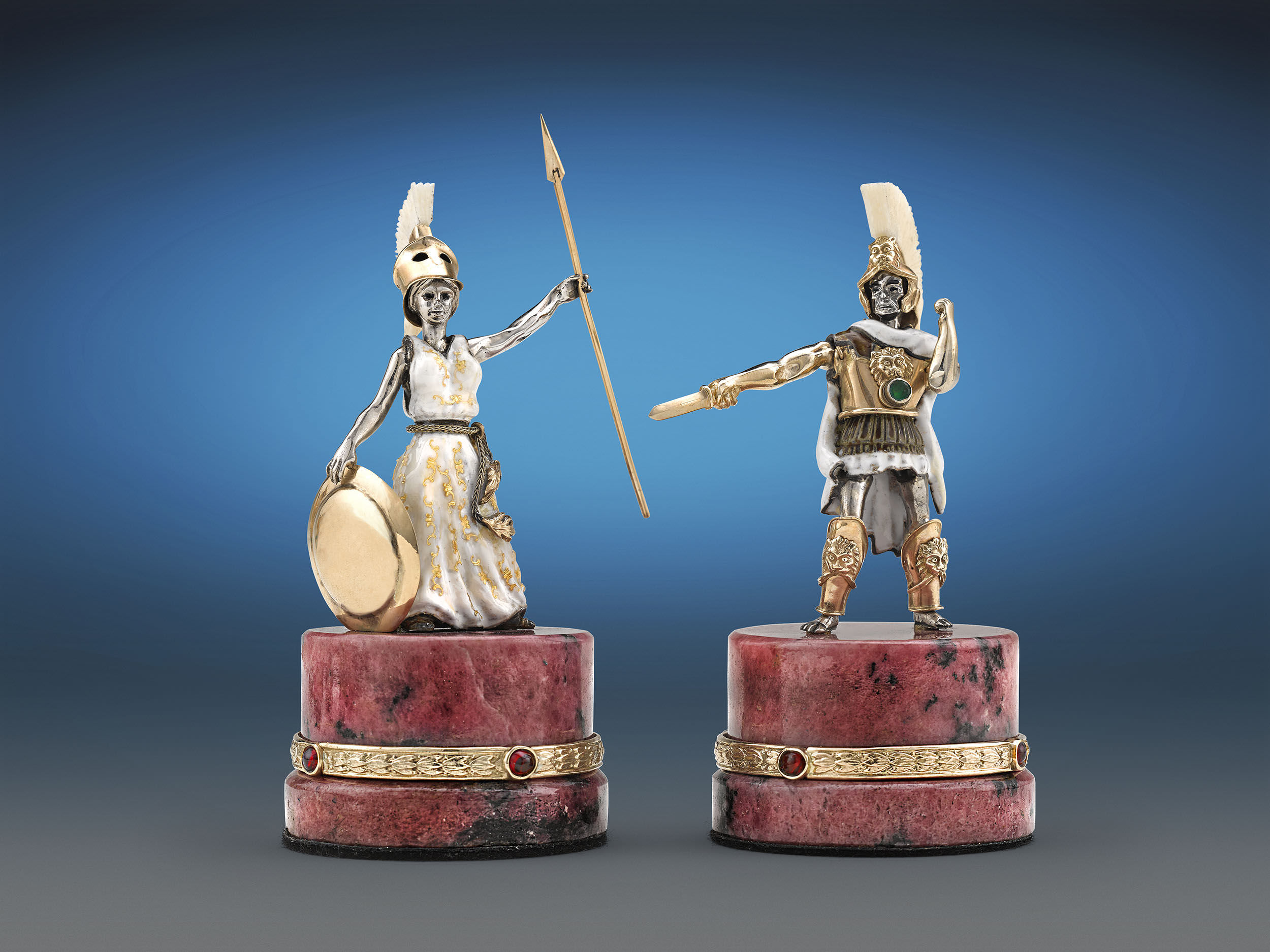 Price tag $1.65 million not only include the intricately designed The Battle of Issus Chess Set, it comes with a board made from the same pink rhodonite and green malachite as chess piece bases. The squares are removable for safe storage. The sides of the chess board feature archers, horsemen, chariots as well as elephants in battle – all made from pure silver and lavishly decorate. The set measuring 25 1/2″ wide x 25 1/2″ deep x 10″ high rests on a custom-made mahogany and leather-topped table. Accompanying everything is a pair of antique 19th-century leather upholstered chairs. 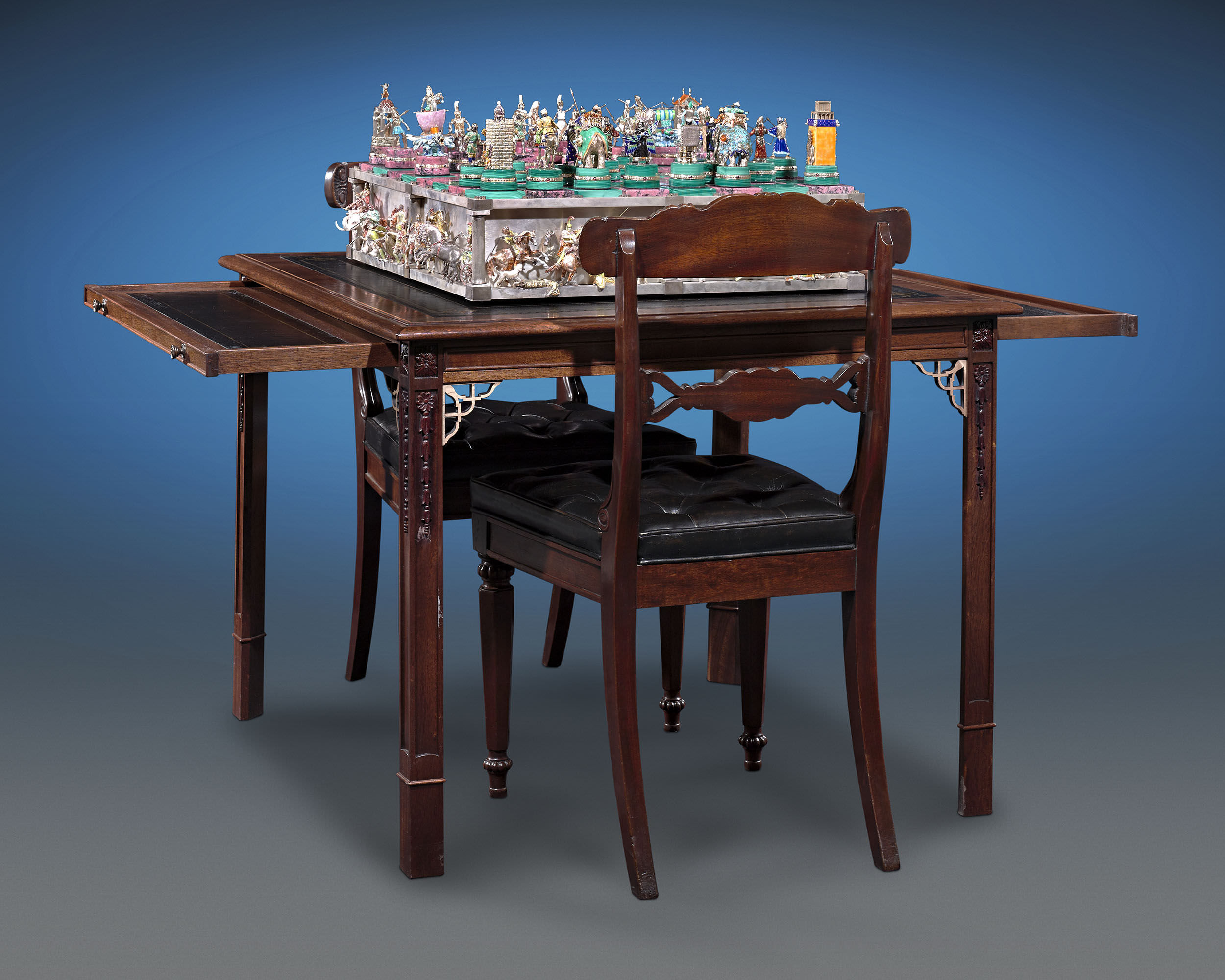