Good folks at Autoweek has done the unimaginable by getting a closer look at the presidential limo named “Beast.” First thing Autoweek found from their NSA scale spying was, this is the most technologically advanced and safest presidential limo in the world. No other world leader ride on a limo like this, Comrade Putin or the Queen of England don’t have anything close to a ride like the Beast.

Here are the secret tidbits. There are in total a fleet of 12 Beasts, each costing around a cool $1.5 million. And the Cadillac is actually not a Cadillac. It’s a custom made truck chassis that look like a limo and drive like a truck. All current limos are built by an R&D section at General Motors in Detroit. According to the secret service agent who anonymously spoke to Autoweek “The car may say Cadillac, but very little in that car is Cadillac. Even the Cadillac emblems on the hood and trunk are supersized.” 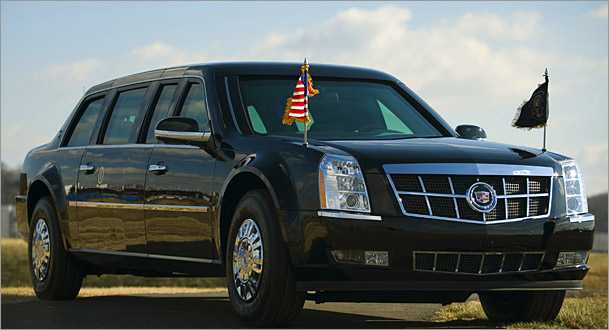 Security features of the Beast include military grade armor plating and thick heavy doors, even president can’t open the door from inside. Armor plated leak proof fuel tank with a Halon suppression system, Kevlar coated Goodyear tires and a special locking system. In the trunk are even more weapons, oxygen supply, emergency medical equipment and president’s blood type in case of an emergency. To protect the president from, say a chemical attack, the interior is completely cut off from outside world and sealed. Even so, the president can continue to work with his staff at White House, embassies or the Pentagon using the encrypted satellite phone and special two-way video system installed in the Beast. It has a V8 gasoline engine with power to go from 0 to 60 – as anonymous secret service agent said: “Surprisingly, it has a pretty good 0-60 pickup.” Presidential limos are driven by highly trained secret service agents.

Presidential limos have their own entourage when travel, that includes limo mechanics and armed federal agents that carry truckloads of electronic diagnostic devices and tools. The current fleet of presidential limos debuted back in 2009 and came with huge improvements than George W Bush’s fleet. Each limo weighs around 15,000 pounds and almost 18 foot long.