If you want to give a fantastic makeover for your luxury car, the best thing to do is to take it to a well-known aftermarket specialist like Vilner, instead of gluing 4,600 Hot Wheels on it. A German owner of a new brand new Mercedes CLA Coupe brought it to Vilner get some customizations done, under a certain budget, but with no restrictions attached in regard to design options. Simply put, design-wise Vilner had the authorization to do whatever it wants with the Mercedes CLA by Vilner.

For Vilner to do their magic, the customer gave them a base model Mercedes CLA and asked them to keep the cost to around 20% of car’s value – which would amount to about $8,000 (in Germany base price for a CLA starts around $41,000). Vilner had decisions to make, not only to stick to a budget, but also to make design decisions and keep a customer happy.

On the inside, Vilner made changes with a two-tone Alcantara color scheme. They covered the A and C pillars plus the ceiling in an eye-catching “Caramel” colored Alcantara. Vilner jazzed up the B-pillars, the sun visors and the panoramic glass sunroof area with “Black” Alcantara. Aesthetically these changes offer a floating effect, this also gives the rear seat passengers a sense of more room above the head. The Caramel leather also appears on the center console. The brown leather in steering wheel’s bottom has blue stitching, to match the blue in new seat belts. 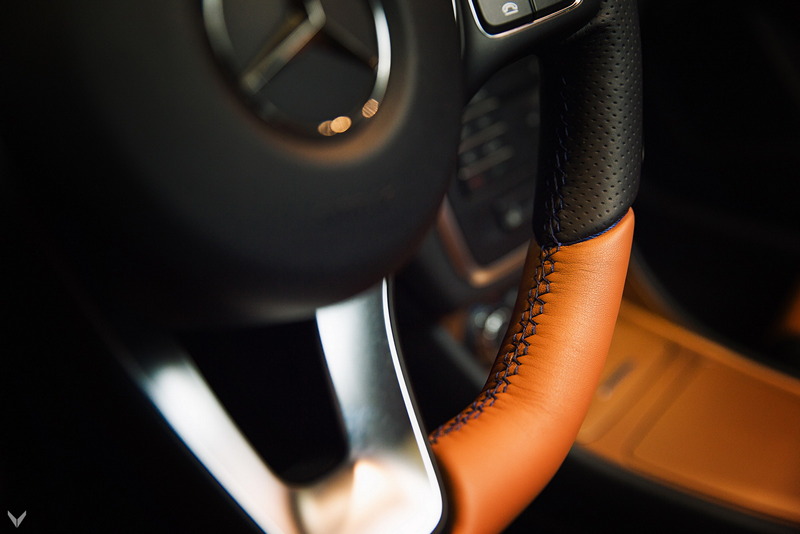 Alcantara in middle sections of upholstery features fine perforations with 3D effect created using a new technique – which also cost them a pretty penny. The perforations not only bring an aesthetically pleasing design to the interiors but also offer comfort to the passengers by way of ventilation. The Same perforated leather used to add glamor to the door panels as well. On dashboard X centers of air vents received their own customization by way of a “Honey Bronze” wrap.

Except for headlamps, outside of the Mercedes CLA received a significant amount of bespoke decorations. The tail lights now have a dark tint and Benz logo received a coat of gloss black. A coat of Honey Bronze was applied to diffuser’s lip, foil stripes and on the previously chromed horizontal element of the front grill. The 17-inch wheels received an extremely eye-catching makeover with their Gunmetal Light Graphite + Honey Bronze paint job. And, you can find Vilner’s signature on the boot lid of the car.