A faux pirate sold his boat to a faux magician. Not really, but last year actor Johnny Depp sold his luxury yacht Amphitrite to author JK Rowling (she of Harry Potter fame) for the handsome sum of $27 million. Rowling, it seems already had enough of seafaring business and now selling it for a lot less. Her asking price is $19.2 million, that’s a loss of $7.8 million. She listed the yacht back in September 2016 and there are still no buyers. Until she finds a buyer, the 156-foot boat built in 2001 is also available for rent for a cool $130,000 per week fee before expenses. 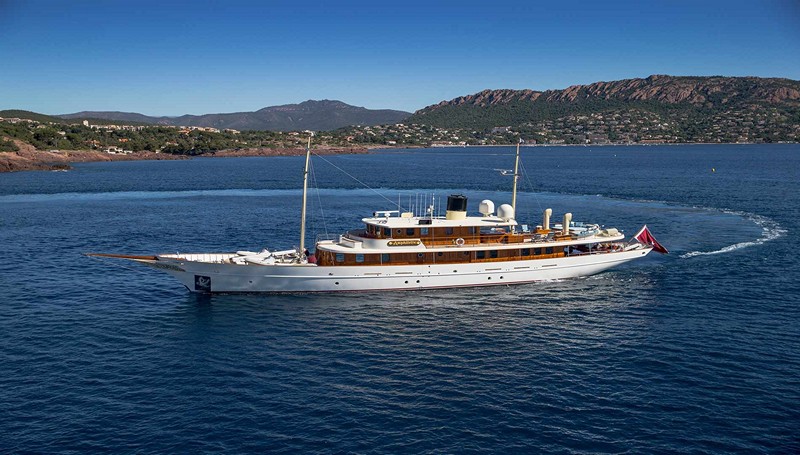 There are plenty of rooms to entertain, relax and party on the boat. It can accommodate 10 guests and a crew of five. Amphitrite’s layout includes a master stateroom on the main deck, 5 well-appointed staterooms, outdoor dining, and recreation space. Refitted in 2009 in Art Deco style, the interiors feature dark woods, heavy velvets, and fancy moldings, which in my opinion are perfect for both pirates and magicians.

Anatolia, as it was originally named had its name changed twice during Depp’s ownership. First time around he named it named Vajoliroja – a combination of first letters of first names of his ex-partner, his and kids – Vanessa, Johnny, Lily-Rose, and Jack. Then re-named it Amphitrite, in Greek mythology, Amphitrite is the goddess of the sea and the wife of the god Poseidon. It is also believed, the second time around Johnny named it in honor of ex-wife Amber Heard. Rowling, happy with the Greek name kept it.

A popular charter yacht, it was built by Istanbul-based Turquoise Yachts in 2001. On the technical side, it can cruise at a speed of 12 – 13.5 knots powered by twin Caterpillar 3406C 480 hp main engines. Check out the JK Rowling And The Cursed Yacht “Amphitrite” at brokerage website.