According to Vilner’s press release, they used more carbon fiber on this little car than they did while working on Mercedes G-Class models. They also used leather and Alcantara to such a large degree – the SmartFor Two is now left with almost no areas with any Brabus finishes.

Inside things are a bit wild – there is a lot of green with a super-hero feel to it (Greenman?) The steering wheel, which Vilner described as a “piece of art” is covered in beautiful perforated leather on the sides, Alcantara on the bottom and center section, completed with green leather accents. More carbon fiber and green accents can be seen on the dashboard and cockpit as well – they include infotainment system, gear shift, glove box, door panels, door handles, dashboard sides and door pockets. There is one more special finish – A-pillars and headliner are now covered in white Alcantara to give it a more convertible feel.

As you can see, the seats have taken a life of their own with plenty of wild artwork. This is achieved by a combination of black leather, Alcantara, green inserts, and stitching. Vilner didn’t want to banish Brabus name from the car, so they embroidered “B” logo on the headrests. Green is everywhere including on sun visors, floor mats and on instruments via LED backlights.

Compared to interiors, the exterior is more subdued. There is white than green. For starters, Vilner gave it a new layer of White Pearl paint, then added some color via black and beige 3D graphics against a lime green background. There is carbon fiber on the rear wheels arches and green rings on the Monoblock VII. The front emblem, grill, and rear diffuser are painted in black. 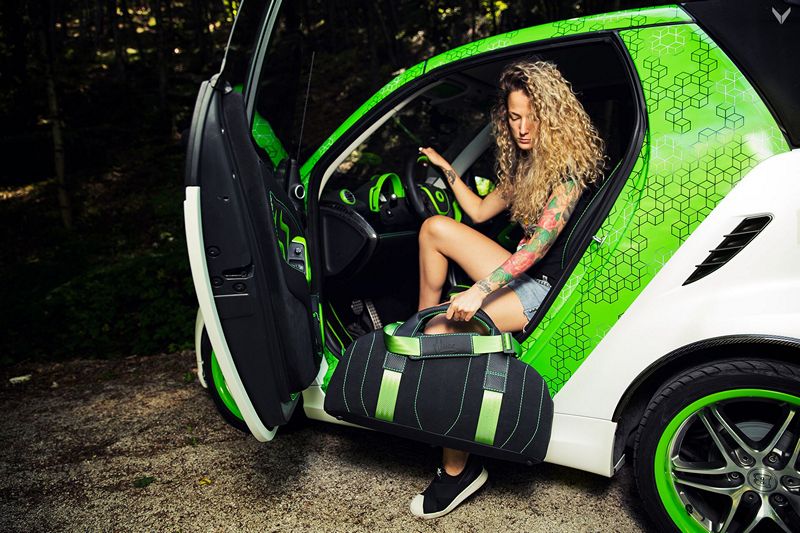 Brabus Smart ForTwo By Vilner comes with its own matching travel bag – made from carbon fiber and Alcantara, and a shoulder strap made from same materials as seat belts – entire ensemble modeled by Vilner’s PR guru/budding model Svoboda Chakrawardaya.