Apparently, there are places on Earth where people love a supremo or two – Russia, North Korea, Turkey and maybe the US. The Russian obsession with this goes a bit further, and that is the sole reason luxed-up tech gadgets with Vladimir Putin’s face plastered on them in gold exists. Italian jeweler Elijah Giacometti and his company Caviar has made a name for themselves over the years, celebrating Putin. Now they have a new model – Nokia 3310 Supremo Putin.

Last week at the Mobile World Congress in Barcelona, HMD Global, the new owner of Nokia, announced their plans to relaunch the classic Nokia. The revamped 3310 is thinner with a 2.4-inch color screen, 2.4MP camera and a headphone jack. And the new version comes with a long 30-day battery life. It will also have the all things that made it the Nokia 3310 – predictive text, ringtone, and the classic mobile game Snake. 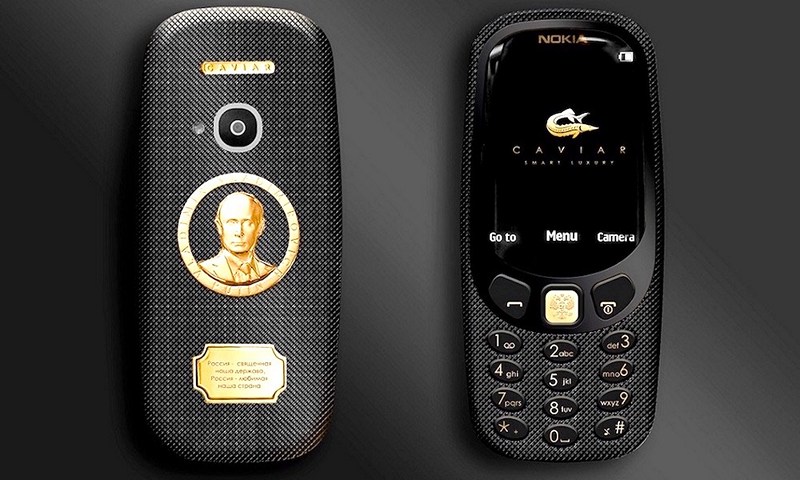 Caviar describes the phone as “Model Nokia 3310 Supremo Putin is inspired by the way the most popular person Russia – President Vladimir Putin.”

Caviar’s luxury version will have a Nokia 3310 with a gold-encrusted Putin face, a plaque with a few hand-engraved lines of Russian national anthem and the Russian Federation coat of arms over the phone’s home button. The phone also has a mesh-like body cover.

Their published selling price is Russian Rubles 99,000 (about $1,700). The Nokia 3310 Supremo Putin is now available for pre-order, from Caviar website. According to HMD Global, release date phone is scheduled for around May/June.