Starbucks Japan has taken a giant step forward, to take its clientele down memory lane by introducing “Purin A la Mode Pudding Frappuccino”. Kissaten coffeehouse New lineup will make you feel like you’ve stepped back in time to the glory days of Japanese coffeehouses.

Starbucks, a brand that’s constantly competing to be new and innovative has now introduced never-before-seen Frappuccino…

What a time to introduce this one of its kind “Purin A la Mode Pudding Frappuccino”? It comes at an appropriate moment when everybody is in the mood of celebrating the ascension of a new emperor and the start of a new era.

In order to bring in the old-school atmosphere and make customers feel like they’ve stepped back in time, Starbucks has added a new retro logo to their outlets with special signboards outside stores for a limited time.

The brown-and-white logo changes “スターバックス”, which is the usual rendering of Starbucks in Japanese, into “スタアバックス珈琲” (“Starbucks Coffee”).

Japanese are more familiar with this kind of logo that gives an old kissaten coffee house impression to the usual Starbucks chain… All of us know Starbucks was not in existence in Japan before 1996. This clever limited-edition rebranding gives customers a taste of what the modern coffeehouse chain might have been offered if it existed in Japan in the ’70s and ’80s. 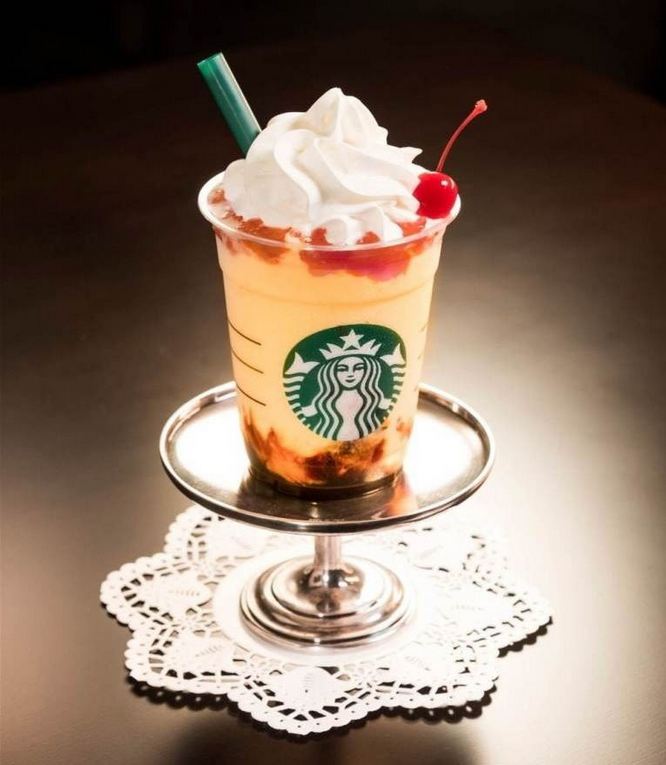 Let’s see what is on offer that enables everybody to bring back a true taste of yesteryear, Starbucks is offering an exciting lineup of retro menu items, with the star being a new Frappuccino that contains all the flavours of a very retro dessert: Purin a la mode.

In Japan, “purin” is a term used for a type of no-bake pudding that resembles a Creme Caramel. And back in the ’70s and ’80s, purin a la mode became a trendy dessert in Japan, with ice cream and various fruits added alongside the pudding, which was often served up at kissaten coffee houses. In substitution for Kissaten coffee house, Starbucks has introduced shiny new Roastery complexes, which are filled with the most modern appliances and furnishings.

Purin a la mode can be served in a variety of different ways, depending on the coffeehouse, but the core ingredients remain the same.

Starbucks’ new drinkable purin a la mode is said to contain a base of caramel sauce, layered beneath a purin-flavoured mix, and topped with a mixed fruit jelly made from mango, apple, and strawberries. Finished with a mound of whipped cream and a cherry garnish, the beverage is said to resemble the original retro dessert in both looks and flavour, taking customers back to a time when purin a la mode was on trend. For elders who were teenagers during 70s and 80s, this is definitely going to bring back their youthful memories with the treat to their taste buds. As an appreciation Children could bring their elders and treat them with this unforgettable treat of the new Frappuccino. It is a range of equally nostalgic menu items, including a coffee jelly cake (440 yen [US$4]), a hot ham and egg sandwich (380 yen), and a Vienna coffee (Short to Venti sizes from 340-460 yen).

Starbucks will keep open its doors to its clientele to experience the retro in Japan for a limited time from 15 May to 18 June.

The Purin A La Mode Frappuccino will also be available from 15 May to 18 June, sold in a tall size only for 620 yen. And if you prefer to look forward rather than back, Starbucks’ regular menu items will be on the menu during this time, including a brand new Royal Milk Tea Frappuccino, which goes on sale nationwide from 15 May.