A Big Mac-inspired big ring is all you need to get the romance going this Valentine’s Day. Named the Bling Mac, it is offered free thanks to a promotional deal McDonald’s stuck with jewelry designer Nadine Ghosn. Valued at $10,000, the seven-tiered sparkling Big Mac comes decorated with diamonds, orange sapphires, 18 karat solid gold buns and cheese.

To get hands on the Blingtastic Bling Mac, simply enter the competition via Twitter and tag McDonald’s with the hashtag #BlingMacContest. Just any tweet won’t do, it is going to the fan “who tweets the best, most creative vows of Big Mac burger love to @McDonalds”. According to the official terms and conditions, the tweet should match the following criteria (i) creativity – 40%; (ii) love and affinity for the Big Mac® sandwich – 30%; and (iii) humor (how witty and comedic is the Entry) – 30%. 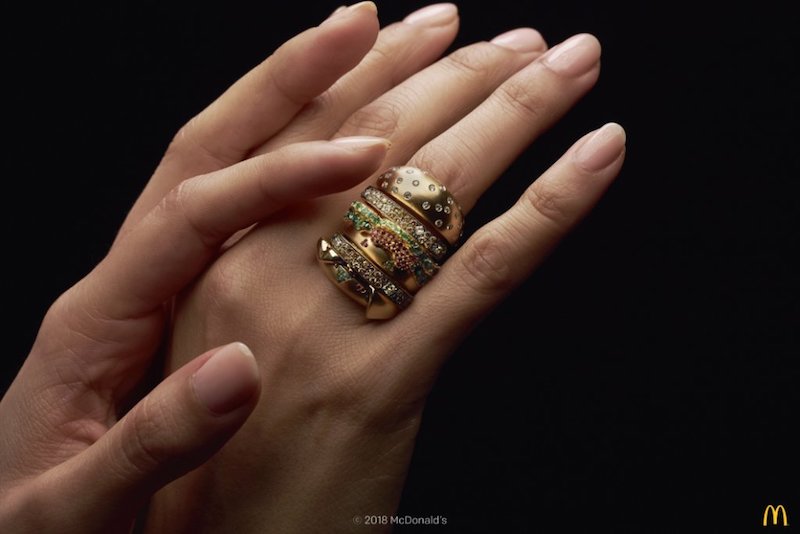 This year Big Mac celebrates its 50th anniversary and make sure to praise your favorite juicy burger on your tweet that is offered in three sizes – Grand Big Mac, Big Mac, and the Mac Jr.

In addition to the ring winner also receives an additional $4,286 to cover any applicable taxes. The sesame seeds of the buns are replaced by white diamonds, while 2 patties are covered in champagne brown diamonds. Its special sauce is made from orange/pink sapphires and green sapphires play acting lettuce. Other two components – pickles and onions are also covered in sapphires. The contest ends at 11:59 pm ET on February 14.