Everyday Luxury Kit Kat, nowhere but in Japan. This is the first new nationwide Kit Kat from Nestlé Japan in a while, last new one “Otona no Amasa” (“Sweetness for Adults”) was introduced six years ago. If there is one thing Japan and its wonderful citizens have mastered, it’s the ability to take an everyday item (read – food) and make it something extraordinary. Here are two perfect examples, plain old burgers from Burger King and McDonald’s getting fancy makeovers.

Nestlé Japan got the hang of this luxury snacks business, like a duck to water. They opened eight dedicated Kit Kat Chocolatory stores in the country since opening the first store in 2014 in Tokyo. Customers lucky enough to find themselves in one of the stores had the chance to try out unique limited edition creations. One of the popular items includes the nitrogen cooled chocolate wafers wrapped in gold, which by the way is a make your own version. 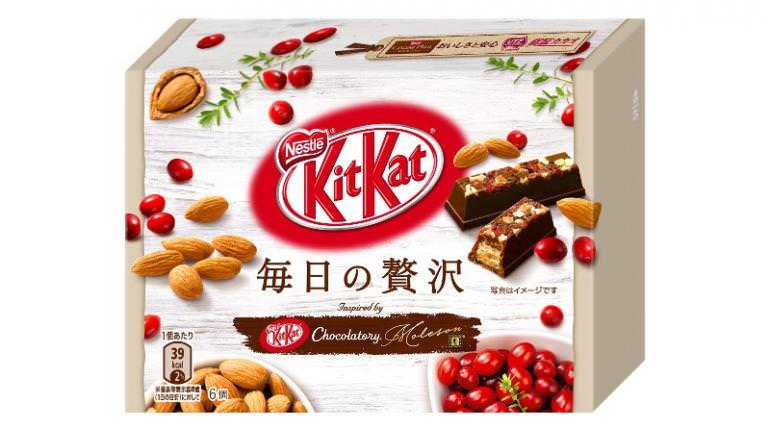 The new Everyday Luxury Kit Kat takes after another popular item available only at Kit Kat Chocolatory stores, the Moleson, which is based on a favorite French Christmas confection “mendiant”. The Moleson (not to be confused with Canadian beer Molson) is a chocolate disc topped with dried fruits and nuts. For the new mass-produced version, Nestle has gone with a new design. Instead of topping them with fruits and nuts, the Everyday Luxury Kit Kat get them finely chopped and embedded on the surface.

Customers pay a premium price at Kit Kat Chocolatory store for the make your own Moleson. So, there is the need to separate custom-made version from the mass-produced ones. To solve the issue the Everyday Luxury Kit Kat will come with the note “Inspired by Kit Kat Chocolatory Moleson”.

How much all this luxury sweetness cost? On September 12, Nestlé Japan released the Everyday Luxury Kit Kat for sale at convenience stores – the six-piece pack costs ¥220 ($2.14). The second version they plan to release on September 26 to supermarkets and other stores is a 105 gram (3.7 ounces) pack priced ¥600 (about $5.90).