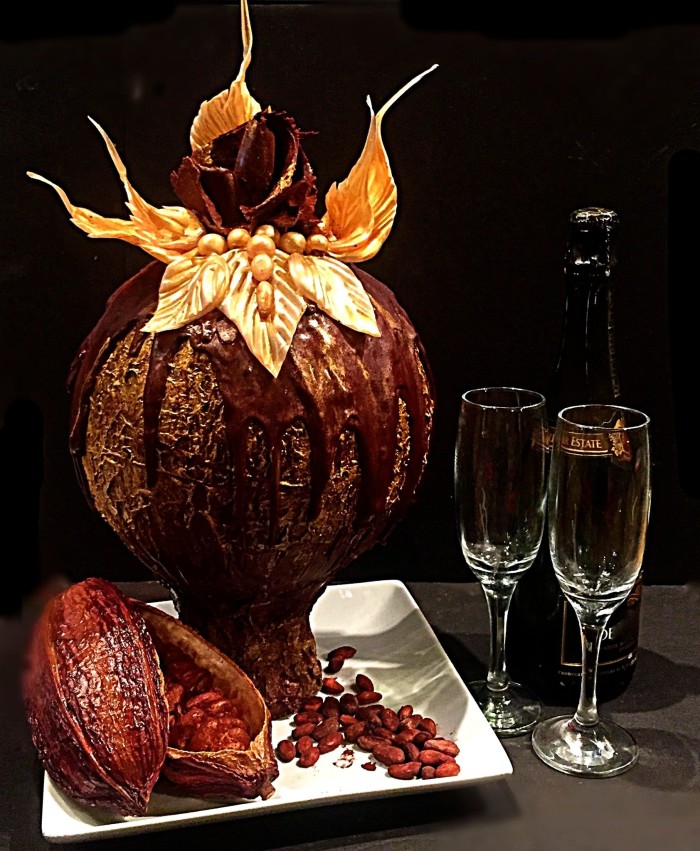 Chocolates from Geneva, Switzerland and Geneva, Illinois have one thing in common – they taste heavenly. For Geneva, Illinois there is only one reason for their yummy chocolates – award winning, record setting French-born Super Chef Alain Roby and his world class chocolate-inspired All Chocolate Kitchen pastry shop. To celebrate the National Chocolate Day, which falls on October 28th, Roby and All Chocolate Kitchen has announced a one-of-a-kind chocolate truffle that will set you back a $3,000. Made of best cocoa in the world “Grand Cru creole chocolate”, the basketball sized truffle was unveiled recently at his famed shop.

For the hefty price tag of $3,000, you get not only a 4 pound heavy chocolate truffle, it also come with two glasses of Dom Pérignon champagne in crystal glasses. The truffle is decorated with 24 karat gold plaits and it will be presented on a blown sugar pillow. No one demands chocolates to be included in the healthy food group but Grand Cru chocolate is considered one of the healthiest chocolates in the world, so there is an added bonus to spending bunch of money on cocoa.

Trained under acclaimed Pastry Chef Lenotre in Paris, Roby has worked all over the world before setting up All Chocolate Kitchen at 33 S. Third Street in Geneva, Illinois. For the past 19 years he has served as the head pastry chef at the NFL Commissioner’s Super Bowl Party. His other accomplishments include creating the World’s Tallest Cooked Sugar Building, World’s Tallest Chocolate Tower and World’s Longest Candy Cane reaching 52 feet long – all three are in the Guinness Book of World Records. He also authored two popular cookbooks as two editions “Alain Roby’s American Classics, Casual and Elegant Desserts”.

To pre-order your Grand Cru Creole Chocolate Truffle call All Chocolate Kitchen at (630) 232-2395. The store is open Monday through Thursday from 9am to 9pm, Saturday from 9am until 10pm and Sunday 10am until 6 pm. You can also get more information via their website. They do ship but only a limited quantity and there is an additional charge for it starting from $300.