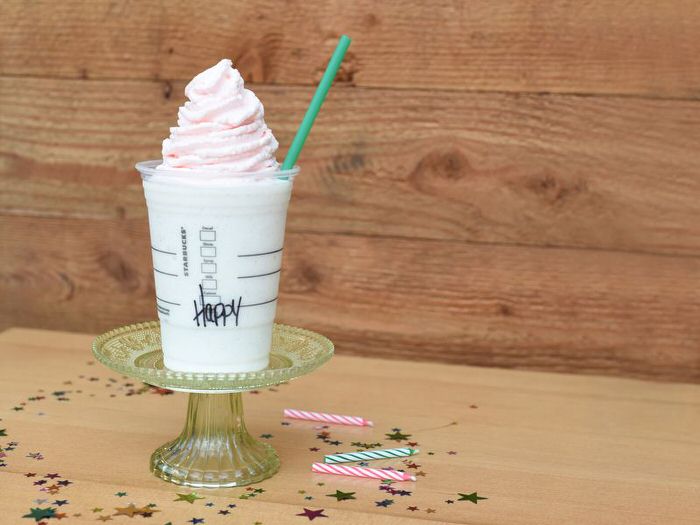 There is no better way to celebrate the anniversary of one of your biggest drink items than with a special beverage named cake. Frappuccino, which Starbucks introduced in 1995 will celebrate its 20th birthday with a limited edition flavor named “Birthday Cake Frappuccino”. The chilled drink will be available from March 26 through March 30, and comprises of a creamy blend of vanilla bean and hazelnut, topped with a special raspberry-infused whip cream.

Frappuccino had an interesting beginning, Starbucks is not even the inventor of the name. It became part of Seattle company’s portfolio when they acquired The Coffee Connection in Boston and they had a product called “frappuccino”. Coffee Connection’s version was a cold and slushy drink made using a soft-serve machine, according to Starbucks. However, Starbucks liked the name so much they applied it to a new cold blended beverage they are working on at the time. Everything related to frappuccino happened during a period of two years from 1993 to 1995 in the West Coast.

After market-testing in California, finally in the summer of 1995 Starbucks introduced the icy beverage to all of its stores in the US and Canada. They had only two flavors at the beginning – namely Coffee and Mocha, made from double-strength brewed Italian Roast and served without whipped cream. It is now served in 66 countries and has more than 36,000 drink combinations. The iconic drink is available in variety of flavors including ones tailored for different regions of the world such as Coffee Jelly Frappuccino and Red Bean Green Tea Frappuccino in Asia, Algarrobina Frappuccino with syrup from the Black Carob tree in Peru, and the chocolate Brigadeiro Frappuccino in Brazil.