A virgin with the fantasy bra, Candice Swanepoel joins the short list of supermodels ever to wear one from Mouawad since their debut in 2001 with Heidi Klum. Other angels to have worn a Mouawad bra over the years include Tyra Banks, Selita Ebanks, and Gisele Bündchen.

Handset in 18 karat gold, the bra also features a 52 karat, pear-shaped center ruby. The Fantasy Bra and Belt are adorned with over 4,200 exquisite gems and diamonds including rubies, diamonds, and yellow and blue sapphires.

With this year’s theme, British Angels, Victoria’s Secret is paying tribute to that colorful, wild and trend-setting swinging sixties when models like Twiggy, Jean Shrimpton and Patty Boyd ruled the runaways and the covers of Vogue, Vanity Fair, and Harper’s Bazaar. The Royal Crown Jewels are also getting some love from the Royal Fantasy Bra with red, white and blue gems and diamonds. 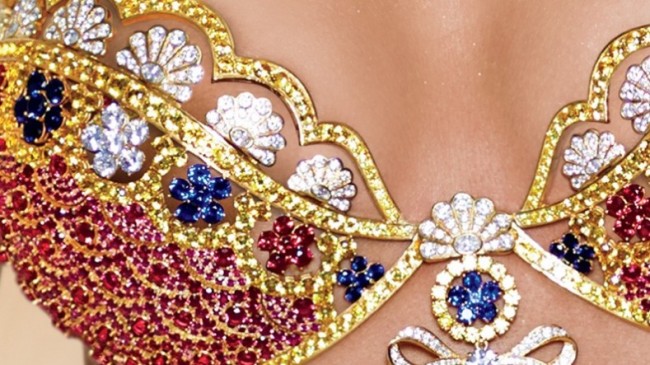