Versace Palazzo Empire bag officially got the “it bag” label from its creator in March during its unveiling. At the same time, Versace invited budding photographers from seven of world’s fashion-centric cities to take part in a competition called “7 Bags for 7 Cities”. Their idea was to create seven limited edition versions of the Versace Palazzo Empire, using winning photographs. Hundreds of participants sent their best images of the seven chosen cities – New York, Beijing, Paris, Hong Kong, Milan, São Paolo, and Tokyo.

Participants were asked to look into not just iconic landmarks, but of lesser-known cityscapes too. Since then the competition has ended and Versace’s creative team picked winning images for the special edition. The unique thing that stands out about images is the contrasting color combination. The skylines of pictures feature fading neon shades. Buildings, on the other hand, are presented in black. Each city has its own color. Versace’s signature Medusa logo acts as a lock for this collection as well. 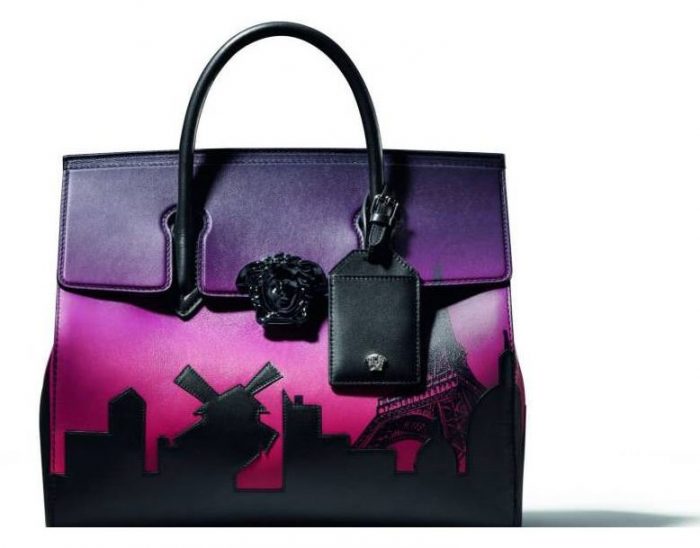 The blue New York bag features the Brooklyn Bridge. The highlight of red and purple Paris bag is the Eiffel Tower. The Beijing bag marked by the Yonghegong Tibetan Buddhist temple and the Tokyo bag with Mount Fuji share yellow and pink color combination. Hong Kong’s Clock Tower bag is in light blue and orange, while Milan and its skyline in orange. The Hand of the Memorial of America Latina for São Paolo comes in green and blue.

For their troubles, the seven winners have bagged a trip to Milan to attend the Versace Spring 2017 show, scheduled to be held on Sep 23. To keep the collection exclusive, Versace made just 10 models of each design. The Versace Palazzo Empire city editions will go on sale at Versace’s flagships at respective cities.