Only a handful of athletes ever gets to play their entire careers for one team – from age groups to senior team and retire on their own terms. In cricket there is Sachin Tendulkar and former New York Yankees player Derek Jeter is another. Many marquee players end up switching teams and moving around, that list includes David Beckham and MLB’s Alex Rodriguez. AS Roma’s captain and playmaker Francesco Totti belong in the list of players who have played an entire professional career with one team. This year 40-year old Trotti is celebrating his 25th year in a Roma uniform, and Nike is there to celebrate it in a big way with the gold-wrapped Nike Tiempo Totti X Roma boot. 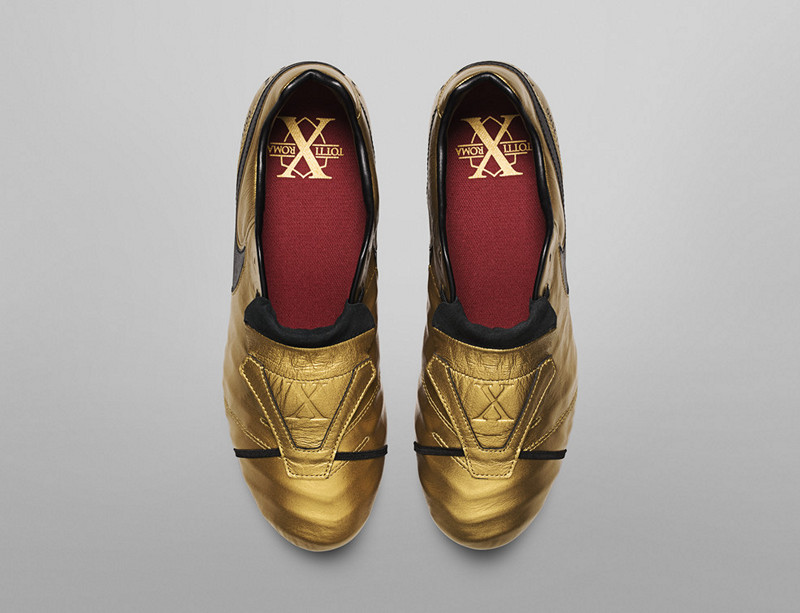 The boot is released as a limited edition of 2,500 individually numbered pairs – 100 for each of his 25 professional seasons at Roma. Born and bred in Rome, Totti dreamed of playing for Roma since he was a kid. He became captain of the club in the 1998-1999 season. During his 25-year career at the club, he won a Serie A title, two Coppa Italia titles, and two Supercoppa Italiana titles. He is also the club’s most capped player and top goal scorer. This is why the people in the city call him “Il Capitano” (the Captain) and they consider him the Eighth King.

As for the design, the boots features an upper crafted in soft leather in a gold colorway to honor Trotti’s accomplishments for both AS Roma and Italy. The heel counter decorations include “TOTTI” and part of the Swoosh in black and “Nike” in silver. On the front, the extended tongue features “Aeterno” on the inside, while the outside is decorated with the Roman numeral “X” in reference to the player’s number 10 jersey, as well as the city’s ancient history. Other decorations outside include aglets with “Totti” in gold and red detailing and a black chromed sole. On the inside, the red insoles are decorated with AS Roma and “TottiRoma” in gold above a specially designed crest.

“This boot had to encapsulate all my values – my family, AS Roma and the city of Rome. Nike understood straightaway how to create these boots,” explains Totti.