A fifth fragrance is set to join John Varvatos fragrance portfolio that started way back in 2004. This being only the fifth fragrance introduced in a ten-year span speaks volumes about his dedication to make only truly artisanal products. The fragrance aptly named Artisan Acqua has earned the right to keep its name. After the debut of March 2004, Vintage arrived in August 2006, followed by the Artisan series – Artisan in March 2009 and Artisan Black in April 2010. As with all his previous fragrances, Varvatos is working with Rodrigo Flores-Roux, the senior perfumer at Givaudan. 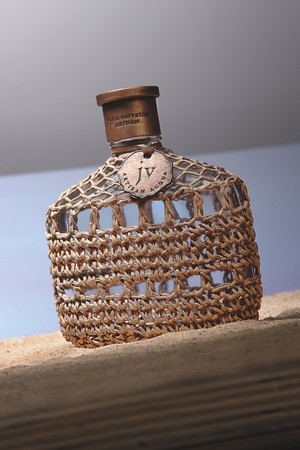 Varvatos refuses to roll out mass produced fragrances, instead preferring to deliver handcrafted, artisanal fragrances, as he puts it “special little treasures and hidden details” in small batches. The Artisan Acqua is a lighter fragrance with a Mediterranean-inspired citrus top notes such as – tangelo, mandarin and angelica roots. Clary sage, lavender, coriander and jasmine sambac are some of its middle notes. Its bottom notes include moss, patchouli, and fir balsam.

Packaged in a handwoven twine covered glass bottle, the fragrance will arrive in 2.5 oz and 4.2 oz sizes with price labels of $64 and $84 respectively. Starting in January, Artisan Acqua will be available in US department and specialty stores, followed by Europe, Asia, and travel-retail rollout later in the year.