If your oligarch papa can spare a few quids dochenka, this necklace with an egg-sized diamond is yours. Razzle-Dazzle in a necklace worth $55 million in Russia, in China or anywhere in the world! Yes, there is such a necklace for such price, now on sale in Singapore from luxury jeweler Mouawad. Named L’Incomparable, the necklace features a yellow, internally flawless 407 karat diamond and 90 white diamonds weighing almost 230 karats, suspended from a rose gold setting. Weighing 637 karats in total.

It was said the diamond named “The Golden Giant” was found by a young girl in the Democratic Republic of Congo about 30 years ago in a mining rubble.

Jean Nasr, managing director of Mouawad in Singapore said: “Serious interest has been expressed by a couple of potential buyers from Asia.” He declined to identify their nationalities. Nasr also added, “People who will get something like this are looking at it from a different perspective because this is definitely an investment piece.” 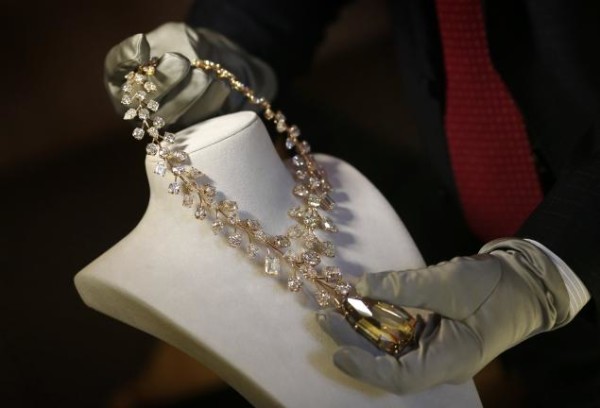