Former British PM Tony Blair is living the high-life of a wealthy conservative. Since leaving office in 2007, Mr. Blair has amassed a fortune of around £50 million thru his work as a business consultant and public speaker. It was reported he regularly charter the £7,000 an hour ($11,000) private jet that features a stateroom, lounge, kitchen, and bed. Customized luxurious 19-seater jet has distinctive black and gold livery, leather seats and walnut paneling.

When he was Prime Minister, Blair outright rejected the plans for a presidential-style jet, dubbed “Blair Force One,” as too expensive.

Blair was seen disembarking the Bombardier Global Express in various places around the world recently. His destinations included Bangkok, Sardinia, New York, Israel, Switzerland, and Ukraine. He was photographed leaving the jet on August 25 in Sardinia and a day later seen in Upstate New York town of Adirondack – an eight-hour flight with an estimated cost of £60,000.

2006 built Bombardier is registered with the UK Civil Aviation Authority in 2008. The Hampshire-based company, Aravco Ltd is listed as its owner. The Bombardier website describes the jet as ‘It is the most luxurious, most accomplished business aircraft ever built, accommodating the desires of the most sophisticated and demanding traveler with no compromises.’ It can fly non-stop for 13 hours and has a 7000-mile range. Jet costs around £30 million ($48 million.)

He was in Bangkok on September 2 to give a speech and the plane was spotted there from September 1 thru 3. This trip itself from London to Bangkok would have cost him £90,000 on published rates.  A spokesman for Mr. Blair said: ‘Taxpayers do not foot any part of the bill.’ 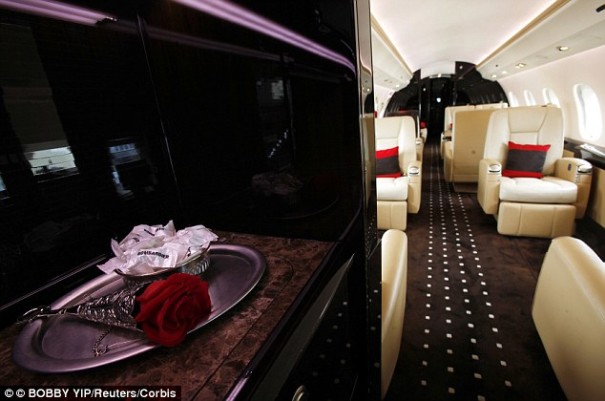