Titanic bandmaster Wallace Hartley’s violin fetched a record $1.7 million (£900,000) at auction today, setting a world record for Titanic memorabilia. Violin was found strapped to Hartley’s body ten days after the sinking. The unnamed successful buyer said to be a British national, who won the 10-minute over the phone bidding war.

Wallace Hartley and his band continued performing as the doomed ship sank, playing the hymn “Nearer, My God, to Thee” to comfort and distract the terrified passengers as they sought places in the few lifeboats. He and his bandmates died when the Titanic sank.

Violin, given to Wallace as an engagement present by his fiancée Maria Robinson in 1910, had a silver plaque engraved with the words “For Wallace, on the occasion of our engagement. From Maria.” Violin was made of maple, spruce, and ebony and has a leather carrying case. A diary entry by Maria said, the violin was saved from the water and returned to her from Canada in 1912. After Maria’s death it was given to the Salvation Army by her sister, then it was passed to a music teacher. After that, it was believed lost until it resurfaced in 2006 in northwest England. 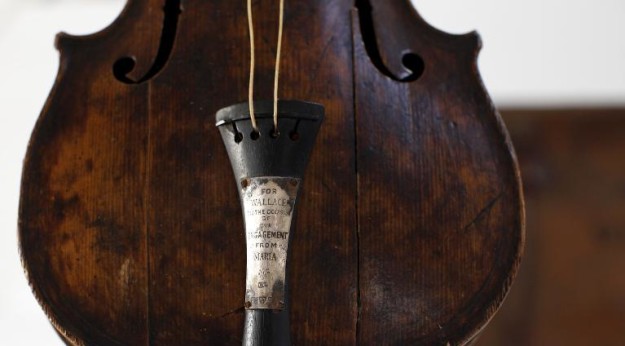 “We’re absolutely overjoyed,” Christine Aldridge, a spokeswoman for the auction house Henry Aldridge and Son in Devizes, southwest England, told AFP. She also said the final price including premiums paid to the auction house was $1.7 million (£1,050,030.)

There was a debate about the authenticity of the violin, it was finally resolved once and for all this year by the auction house, after 7 long years.

Bidding for violin started at just $80 (£50,) because the principal auctioneer Alan Aldridge joked that he was setting the price so low so that two of his friends could bid. Within few minutes it passed the previous record of £220,000 (approx. $355,000) for a piece of Titanic memorabilia sold at auction for a 33-foot plan of the ship in 2011.

Andrew Aldridge, a valuer with the auctioneer, said he hoped the violin would stay in Britain and go on display. “It symbolizes love, with a young man strapping it to his body because it was an engagement present from his fiancee,” he said.

Other Titanic-related memorabilia on auction included the violin played by the actor who portrayed Hartley in the 1997 “Titanic” movie starring Leonardo DiCaprio and Kate Winslet. Belfast made Titanic set sail from Southampton, England, for New York on April 10, 1912, before hitting an iceberg just days later.