Another piece of Titanic is about to go under the hammer in London this weekend. The violin believed to have belonged to the bandleader on the Titanic, the same violin he used to play the hymn Nearer, My God, to Thee as the ship sank.

Auction house Henry Aldridge & Son, in charge of the auction expect the violin to fetch close to $500,000, making it the highest ever payment for a Titanic memorabilia.

Wallace Hartley, the bandleader, and all his fellow musicians died in the disaster. His body was recovered from icy waters by ship CS Mackay-Bennett two weeks after the sinking. It was reported Wallace was found “fully dressed with his violin still strapped to his body.”

“The band playing on was an incredibly selfless act,” said Andrew Aldridge of the auction house. “William Hartley is an iconic individual. That is represented in the instrument.” The story of the band playing to comfort and distract passengers in the face of impending doom immortalized in movies. Survivors did report that the band continued to perform as tragedy loomed.

Though there is a lot of interest for it, some doubt it actually was Wallace Hartley’s violin. But the auction house and other experts who examined the violin certify it actually is Hartley’s. Violin even underwent a CT scan for a closer look at its composition and damage. Several other items found with Hartley’s body has been authenticated as belong to him, including a silver cigar case. Hartley’s fiancée, Maria Robinson, wrote in her diary that the violin had been recovered from the Atlantic and given to her. 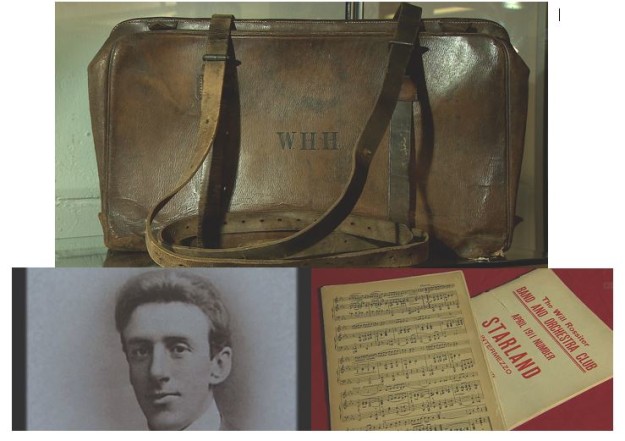 For nearly three months earlier this year, the violin went on display at Titanic museums in Missouri and Tennessee in the US. It has also been exhibited in Belfast, Northern Ireland, where the Titanic was built, and Hartley’s hometown in Dewsbury, Yorkshire.

“There’s been phenomenal interest in it,” Aldridge said. In April a letter sent from Hartley to his parents fetched close to $150,000. “Just a line to say we have got away all right,” Hartley wrote. “It’s been a bit of a rush but I am just getting a little settled. This is a fine ship.”

Two years ago a 32-foot-long schematic drawing of the ship that was used in the official inquiry into the tragedy got sold for around $350,000. Other Titanic items to go under the hammer on Saturday include Titanic’s original insurance document and an original promotional poster.