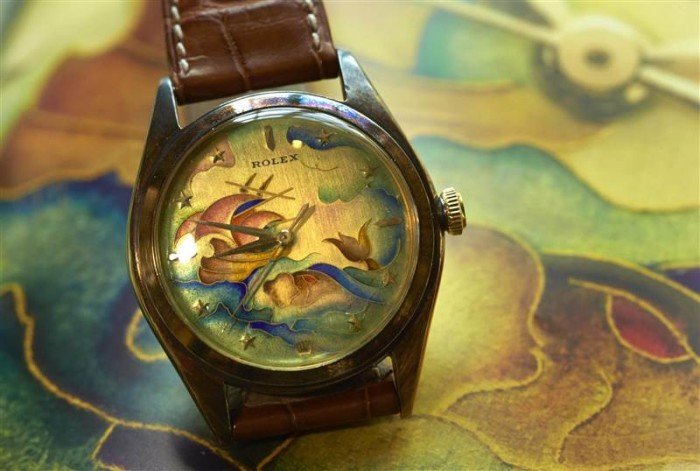 The rare 1949 Oyster Perpetual model with a cloisonné enamel dial became the most expensive Rolex ever to be sold at auction by fetching $1.2 million. Christie’s had a pre-sale estimate between $570,000 and $1.13 million for the exquisitely decorated timepiece, however strong bidding sent the final sale price above high end of the estimated price.

The Rolex, powered by an automatic jeweled lever movement is housed in an 18 karat gold case. Its Marguerite Koch designed cloisonné enamel dial portrays a whale and frigate sailing through stormy seas. Other fascinating dial details include sweep center seconds and star numerals.

The Geneva watch sale has been a huge success for Christie’s as it brought in $26.5 million in deals. They managed to sell 91 percent of the watches made available. The collectible watches are growing as a business investment segment on its own. Collector’s come from all parts of the world making it a global market and at the same time driving prices up. Bidders from 30 countries participated in this auction.

Another watch to capture attention at the auction was a Patek Philippe, a platinum cushion-shaped minute repeating wristwatch from 1900’s, custom made for prominent banker Henry Graves Jr. It fetched $1.34 million.