The man who successfully bid for the diamond left the room soon after, to a round of applause. Christie’s declined to reveal buyers identity. 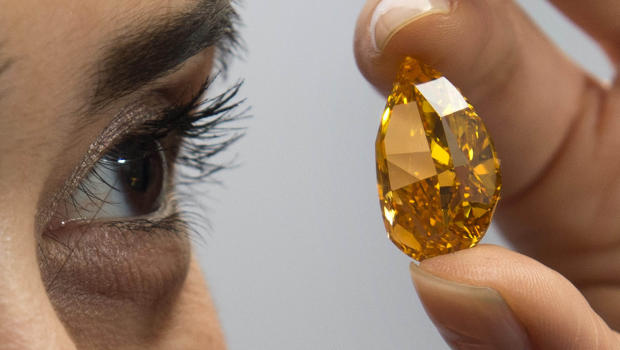 Including fees average price for a karat of this diamond worked out at $2.4 million, beating the previously held $2.15 million Vivid Pink Diamond in 2010 in Hong Kong. The orange diamond weighs a massive 14.82 karats. The Gemological Institute of America (GIA) has awarded it the top rating for colored diamond “fancy vivid.”

According to Alan Bronstein, a consultant in colored diamonds who also know the orange diamond commented before last night’s sale “as far as orange diamonds go, it has no peer.”

Christie’s said the diamond found in South Africa, had been with the same owner for the last 30 years. It had a presale estimate of $16 million, which was easily exceeded by $20 million when the hammer fell.