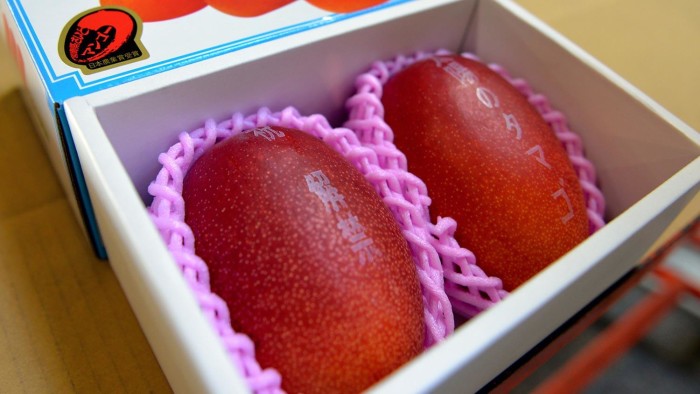 Would you pay thousands of dollars for a pair of fully ripe mangoes? I wouldn’t. In Japan where fruit prices are exorbitant, a special type of mango under the brand name of the “Taiyo no Tamago” which translates into English as the “Egg of the Sun” was sold for a hefty $3,000. As for fruit prices in Japan, an apple cost $3 and 20 cherries $100, that’s all you need to know.

Japanese media thinks reason for high price is due to this being the first fruit auction of the year for the Egg of the Sun. Apparently these mangoes grow in the far south of Japan and had to airlift to Fukuoka where the auction took place. Before the auction several strict quality control tests were performed to certify these are the real deal “Taiyo no Tamago” mangoes. Tests conducted by the Miyazaki Agricultural Economic Federation verified, each fruit weighed at least 350 grams and have a high sugar content.

According to the local Agricultural Federation, this is year’s great sunny weather is the main reason for superior quality mangoes. These mangoes however don’t take the crown as the most expensive fruits ever sold, as that title belongs to a pair of cantaloupes sold in 2008 for a whopping $25,000. The federation also noted that quality of this year’s fruit harvest has increased along with that quantity.

The wholesaler who bought the mangoes for the record price said he wanted to uphold the value of the “Egg of the Sun” brand and promote Miyazaki, where the auction happened.