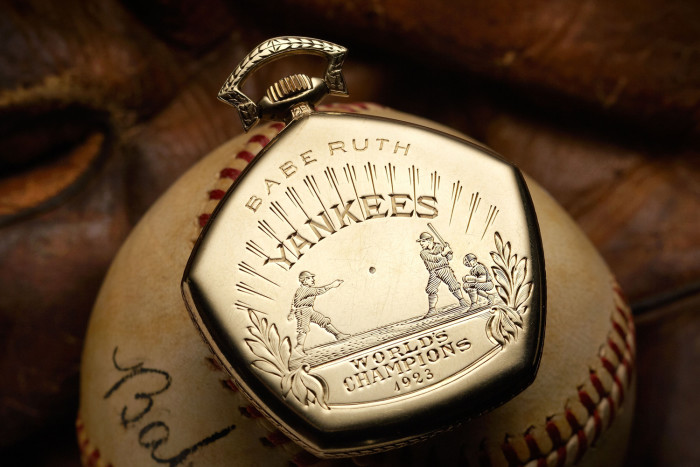 The Gruen Verithin pocket watch given to Babe Ruth by the New York Yankees after their first World Series win in 1923 is now up for auction at Heritage Auctions. Babe Ruth in 1923 hit .386 and scored three home runs against cross-town rivals New York Giants giving Yankees their first of twenty seven World Series titles. So, this watch holds more than a little sentimental value for any baseball fan and even for sport’s fans in general.

The case of the pentagonal shaped pocket watch is made of 14 karat gold. Prior to this, Heritage Auctions had auctioned 3 other Gruen Virithin pocket watches that belonged to front office staff of te Yankees that were gifted for the same 1923 win. The main differences between Babe Ruth watch and others is “Babe Ruth” is engraved on the front of the case in addition to the dedication etched on the case back “Presented by Baseball Commissioner to George H Ruth”. This is also the only known official award presented to Ruth for his contributions in claiming the first New York Yankees World Championship. 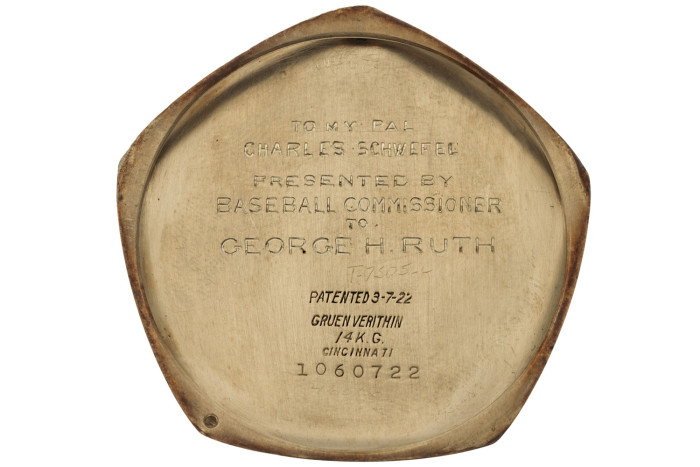 The case front features pitcher, batter, and catcher, with “YANKEES” up top and “World’s Champions 1923” below. The engraving on the case back was done by three different parties. First is the engravings from Gruen with details relating to the watch such as the patents, the hallmark information, and the serial number. Second engraving is the dedication, presenting the watch to George H. Ruth from the Commissioner of Baseball. Third and final engraving “To My Pal Charles Schwefel” was added by Ruth. Before his death Ruth asked his friend Schwefel if he want anything from his collection as a memento, Schwefel asked for the pocket watch. So the engraving was added by Ruth just prior to gifting watch to Schwefel.

The Swiss made manual wound movement features bridges and a swan-neck regulator. 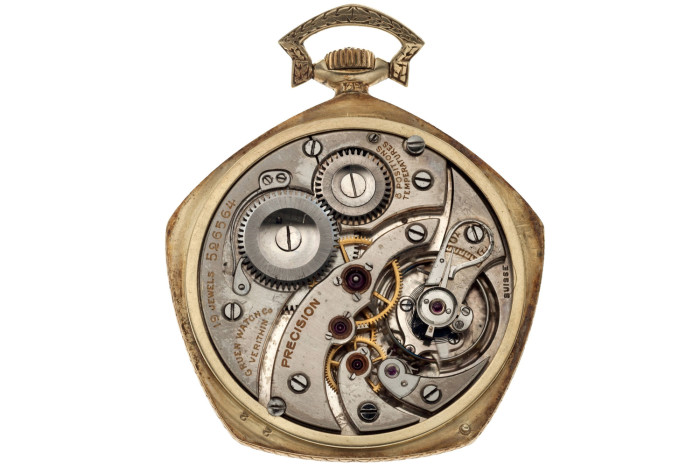 For a long time it was believed the babe Ruth watch had been lost. This is the first time watch is available for public sale. Charles Schwefel’s nephew Lewis Fern had the possession of the watch until 1988, then he privately sold it to one of the finest sports collections in the world. The watch is now offered for public sale by the same collector. From Babe Ruth to the sports collection, the ownership changed hands only three times.

The watch is currently not functional but its sentimental value worth more than that. Heritage notes it can be easily restored if the new owner choose to do so. Online bidding is now open at Heritage Auctions with a final live bidding set to take place on February 22nd. Pre-estimate of the watch stands at $750,000. 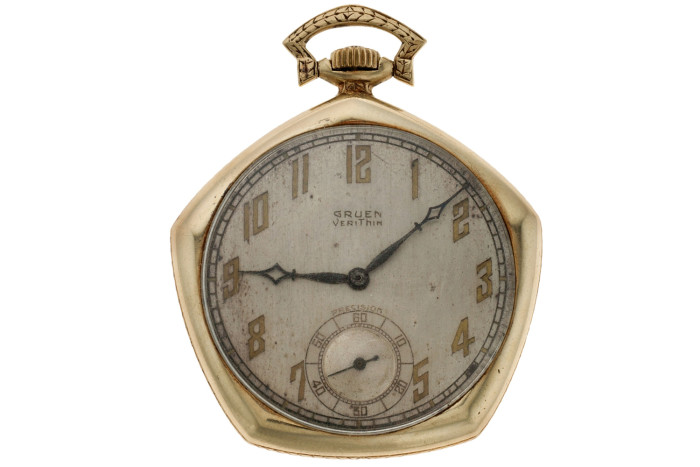