At the recently concluded “Important Watches” auction at Christie’s New York, a Rolex was sold for a record price. The 1950 Rolex “Sleeping Beauty” wasn’t meant for great things at the auction, it had a modest pre-sale estimate of $250,000-350,000. The stainless steel Ref. 8171 watch surprised everyone with the big bidding war it created that spread over four countries. Things came to an end when it replaced its previous nickname “Padellone” (Big Frying Pan in Italian) with “Sleeping Beauty” – due to its surprise result, and snagging a princely sum of $1.145 million for its owner.

The main highlight of this rare watch is its triple date, additionally, it also features a moon phase display. The two-tone silvered dial of the watch features diamond-set and applied baton numerals, light blue Arabic numerals on outer date ring, two apertures for day and month below 12 o’clock, blued steel date hand, silvered hour and seconds hands and moon phase at 6 o’clock. The watch is powered by an automatic Cal. A.295 CPL with 18 jewels 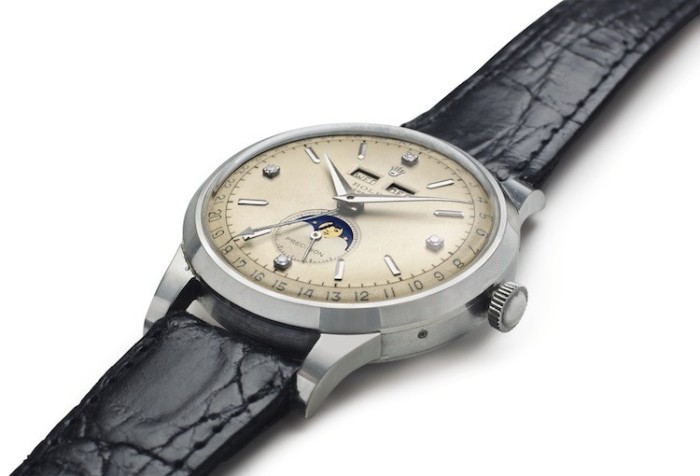 Only 1,000 pieces of this watch were made. Prior to this auction, this model wasn’t considered a rare watch, at least not in the same league as Ref. 4113 chronograph Rolex from 1942 – which was sold for a record Rolex price of $1.16 million in Geneva last May.

The auction also included the Patek Philippe pulsometer watch worn by Dr. Kemp Clark, who called the time of the death of President John F Kennedy as the attending Neurosurgeon of The Parkland Memorial Hospital. It was sold for $161,000.